Spotlight: The Right Kind of Guy (What Happens In Vegas) by Kerri-Leigh Grady 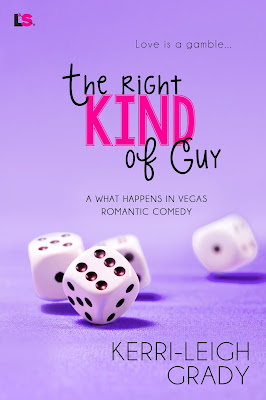 Romance novelist Kelsey Spencer doesn’t believe in love, and she's tired of faking her way through happily ever afters. Determined to change things up, she heads to the Las Vegas Romance Lovers Convention. But somewhere between half-naked cover models and hot Navy SEALs, Kelsey’s plans derail...

Buttoned-up Aaron Grant never thought he’d find himself at a romance convention, but here he is, trying to convince his impulsive sister not to marry a beefcake cover model. His only hope is to enlist the aid of the cynical (and sexy) romance writer his sister worships.

After a sweltering jaunt around Vegas, some strange conference hijinks, and one outrageous proposal, Kelsey and Aaron are left questioning everything they know about romance and love...and if falling in love might just be worth the gamble.

“Romance writers. You have a reputation for being into salacious details of others’ love lives. Another stereotype?”

“Yes!” She poked his arm. “You’ve been watching too much TV. Too much bad TV, at that.”

He cocked his head and studied her. “What else is wrong about the stereotype?”

The way his eyes swept over her, she knew exactly what he meant, and the flush racing up her neck decided to head south and warm the rest of her body. She grabbed another sip of her drink. “So tell me the salacious details of your love life, then.”

“You say that like the lack of commitment doesn’t appeal to you. But aren’t all rich boys players and scoundrels? You should be right in your element.”

“I hear romance authors know some new tricks, and I’ve been considering expanding into two- and three-night stands. Maybe I should find someone at this conference willing to teach a world-weary scoundrel.”

His voice melted over her, but she couldn’t make her tongue work to answer him. Her head swam, and she realized she might have overdone the drinks considering she hadn’t eaten much at lunch. She needed to slow down. Or maybe hydrate. She cleared her throat. “Do you have a tattoo?” she asked, signaling the bartender for water.

His eyebrows lifted. “Maybe. Do you?”

“You show me yours, I’ll show you mine.” She slapped her hand over her mouth. “I can’t believe I said that.”

Aaron laughed, and Kelsey tried to turn away in protest, but she had to grab the bar through a wave of dizziness.

Aaron caught her by the shoulders, spun her to face him, and she rested her hands on his arms. The muscles under her palms were rock-hard and reassuring, not too big, but definitely not small. “You okay?” he asked.

She nodded. “I don’t know how I ended up feeling this way about your poor sister when I only met her like two hours ago, but…Jas seems like a really good person, and I don’t want anything bad to happen to her.”

“And maybe it doesn’t hurt that you have nice biceps.” 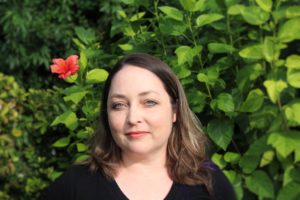 Kerri-Leigh Grady loves to sink into happily-ever-after tales and blow-up-all-the-things tales, especially when her testosterone-loaded house has hit its monthly limit of athletic socks and slapstick. She holds an MFA from Seton Hill University and a BS in computer science, so she’s a kind of half-artsy, half-nerd ball of nervous twitching. She has an unnatural love of dark humor, gadgets, chickpeas, BJJ, terrible acrylic landscapes, half-assed jewelry, and planners (Hobonichi and TN, natch). When the zombie apocalypse happens, she’s likely to be patient zero. If you see her bite someone, grab your water and head for your bunker.