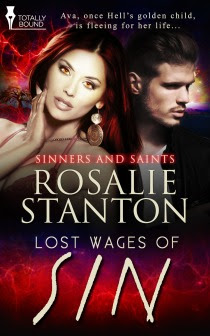 Working for Lucifer is the best job in the universe, until the day it’s not. Then you’re on your own, with Hell at your heels.

Ava, Sin of Greed, has had a rough week. The angel she planned to make a life with left her with nothing but a Dear Jane letter. Even worse, Lucifer believes she spilled Hell’s secrets to her ex, and her boss’s temper is notoriously apocalyptic.

For centuries, Dante has kept his feelings for Ava under lock-and-key. The one time he pursued something more, he nearly lost her for good. Lesson learned. However, when he hears of her planned elopement, all bets are off. Not having Ava was a reality he could have accepted. Losing her to an angel is something else entirely.

Now, Ava, once Hell’s golden child, is fleeing for her life. When her old friend Dante shows up, her first instinct is to send him packing. But Dante is more than a friend—he’s the only other man who tempted her, and his fierce loyalty challenges everything she thought she knew about him. As Ava prepares to battle the devil himself, she can’t keep from getting closer to Dante…though given what happened the last time, she doubts her heart can survive another break.

Reader Advisory: This book is best read in sequence as part of a series.
Publisher's Note: This book was previously released by another publisher. It has been revised and re-edited for release with Totally Bound. “Not from me,” she said sharply. “I didn’t tell him. I never told him anything. I don’t know how he found out.”

Gula clearly remained skeptical. She would have been insulted were she not so damn numb. As it was, her warring insides had yet to settle on any one emotion. Between the inane urge to cry her eyes out and the survival instincts commanding her to flee, she couldn’t tell up from down.

Instead, she decided to focus on the one thing she knew. “I didn’t tell him anything, Gula. What the hell do you take me for?”

“You bedded the guy.”

“Do you really need me to go on?” He waved the letter. “You’re not other people. Do you have any idea what this is gonna look like?”

“Any idea? Asshole, I can’t even decide if I wanna scream or cry. I haven’t gotten to what this is gonna look like.” Her itching legs disagreed, but she decided not to tell him that. Running now, with Gula looking at her like he didn’t know her, didn’t seem the wisest move.

“You wanna say that a little louder? You don’t have to whisper.”

A shadow fell across his brow. “Is this funny to you?”

“But I didn’t tell him!” Ava’s chest heaved, her ears ringing, the corners of the room starting to blacken. Here it was at last—the panic. The rush. The crash of holy shit fear she’d been waiting for. Gula didn’t believe her. Of her brothers, Gula was the one she was closest to. If Gula didn’t believe her, Luxi wouldn’t either. And Invi, Ira…shit, none of them would.

Facing Lucifer with her siblings at her back was dicey enough. He wasn’t one to give a crap if his decisions were popular, but with all Seven Deadly Sins united as one, she might—just might—have stood a chance. Alone, and she was a dead woman walking.

Get to know the Sinners and Saints!

Books 2 through 5 of the Sinners and Saints are not currently on sale.
Images below will take you to their respective Totally Bound pages.

Rosalie lives in Missouri with her husband. At an early age, she discovered a talent for creating worlds, which evolved into a love of words and storytelling. Rosalie graduated with a degree in English. As the granddaughter of an evangelical minister, Rosalie applied herself equally in school in the creative writing and religious studies departments, which had an interesting impact on her writing. When her attention is not engaged by writing or editing, she enjoys spending time with close friends and family.