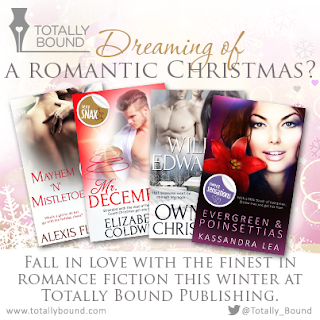 P.S. A huge thank you to Totally Bound for providing graphics!

Brylee Mariotte is hoping to get a boyfriend for Christmas, and when she meets Liam Casey, it looks like she might just get her wish.

It’s the magical holiday season again and, like everyone else, flower shop owner Brylee Mariotte can’t help but get swept up in it. Of course, the phrase ‘happiest time of the year’ only makes her loneliness worse. As she watches the happy couples, she starts wishing and hoping for Santa to bring her a man to call her own, and not just for the holidays. She wants the real deal—someone for the long haul.

When the dashingly handsome Liam Casey offers her a helping hand, Brylee begins to think that miracles might just exist. The bookstore owner’s touch lights a fire deep inside her, one she thought would never get burning. But what if Liam isn’t as into her? Or, even worse, what if he’s already married?

With a little touch of evergreen and a whole lot of Christmas magic, Brylee may just get her man.

WANTED FOR TOO MUCH CHEER: Misty Toll. Dealer of mistletoe, aka Happy Juice. Be extremely careful. Too hot to handle.

When Christmas is declared illegal, Misty Toll finds herself dealing mistletoe juice to fund Santa’s revolution to bring back Christmas. But Santa’s addicted to his own product, Rudolph’s red nose is from too much vodka, and there’s a bunch of rabid revolutionary elves on the run.

Then there’s the delicious Scrooge, Zane Mason, the new man hired to work on the deer farm. The same farm where she’s hiding Santa’s reindeers and her secret stash of mistletoe.

What’s a girl to do but go with the holiday cheer?

Although she had no idea that Grant and Daniel were brothers, Grant revives all those needs that Daniel can’t fulfill. But she won’t give up the man who helped mend her broken heart after Grant shattered it—even if she has to bury the submissive part of herself to do it.

A year ago, Grant Farrell left the woman he loved—and the best sub he’s ever controlled—to tend the family ranch after his father’s death. It almost tore his heart out to leave Kate but he had no other choice. But he doesn’t realize how much it hurt them both until she shows up at his family’s home on his brother’s arm.

Perfect Christmas Reads
If you're looking for some steamy Christmas reading, these festive reads are bound to heat things up! Visit the link below. 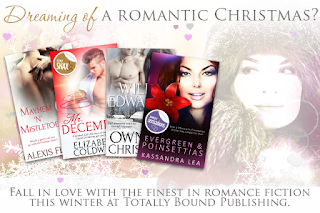 Posted by CrystalBee at 9:36 PM