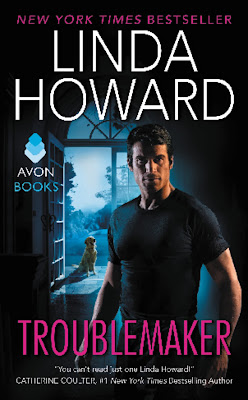 For Morgan Yancy, an operative and team leader in a paramilitary group, nothing comes before his job. But when he’s ambushed and almost killed, his supervisor is determined to find out who’s after the members of his elite squad—and why. Due to worries that this unknown enemy will strike again, Morgan is sent to a remote location and told to lay low and stay vigilant. But between a tempting housemate he’s determined to protect and a deadly threat waiting in the shadows, keeping under the radar is proving to be his most dangerous mission yet.

The part-time police chief of a small West Virginian mountain town, Isabeau “Bo” Maran finally has her life figured out. She’s got friends, a dog, and a little money in the bank. Then Morgan Yancy shows up on her doorstep. Bo doesn’t need a mysterious man in her life—especially a troublemaker as enticing and secretive as Morgan.

The harder they fight the intense heat between them, the closer Morgan and Bo become, even though she knows he’s hiding from something. But discovering the truth could cost Bo more than she’s willing to give. And when Morgan’s cover is blown, it might just cost her life.

It was dark, the other side of nine-thirty, when he pulled into his parking slot at the condo. It had been late when he’d docked the Shark, then he’d cleaned his tackle and locked it away before heading home. He’d also made a brief stop at a grocery to cover his basic food needs; he hooked the plastic bags on his fingers and dragged them with him as he slid out of the seat. A click of the remote locked the truck.

The condos were at least thirty years old, six rows of two-story buildings made of brick and pebbled concrete. He supposed the effect was supposed to be modern and uncluttered—and maybe it had been thirty years ago, but now it was nothing more than butt-ugly. Each ground-floor unit, like his, had its own little patio, while the upper-story condos had balconies that struck him as fairly useless but that were used a lot during the summer for grilling and such.

The plastic bags rustled and banged against his left leg with every step, reminding him of why he hated buying groceries. After the fact, he always thought that he should throw a backpack in his truck and leave it there for hauling in what few groceries he bought, but he wasn’t home often enough for it to be a habit so he’d forget about the backpack. He’d also almost forgotten he didn’t have any coffee left, but the grocery’s sign had caught his eye and he’d whipped into the parking lot without time to signal, resulting in a few indignant horn blasts. Couldn’t be helped; he had to have coffee.

A concrete support pillar and some tall shrubbery partially blocked his view of the condo building, something that grated but the homeowners’ association wasn’t willing to do away with part of its mature landscaping and shady trees just because he didn’t like it. He couldn’t explain that the greenery provided points of ambush because civilians simply didn’t get shit like that, so he dealt with it. It wasn’t as if he had a lot to worry about; the crime rate in these units was very low, and was in fact a selling point for the young families who made up the majority of residents.

Still—habits were a bitch, but he couldn’t ignore half a lifetime of training. To keep from walking around a blind corner, he swung wide into the street the way he always did so he was approaching straight on; there wasn’t a lot of traffic in the condo development, and he didn’t often have to wait until a car passed.

But even with a direct approach, he still didn’t like it. Sometimes, such as now, he liked it less than at other times, and he couldn’t have said why. He didn’t have to; instinct was what it was.

He stopped in his tracks.

The sudden surge of awareness was like an electric shock, sending all of his senses into hyperalert. He instinctively moved his right hand to the pistol snugged into the holster at the small of his back even as he tried to pick up any movement in the shrubbery that shouldn’t have been there, anything that was responsible for making the back of his neck suddenly prickle. He couldn’t see anything, but still his senses were screaming. Something was there, even if it wasn’t anything danger—

The thought hadn’t completely formed when the shadows of the shrubbery moved slightly, black on black. More adrenaline shot through his system, and Morgan acted without thought, training taking over as he dropped the plastic bags and dove to the left, leaving his right hand free as he pulled his weapon.

His body was still airborne, stretched out, when he saw a faint flash and a sledgehammer hit him in the chest.

He had two distant but clear thoughts: Suppressor. Subsonic round.

He slammed to the ground, the impact almost as jarring as the sledgehammer to the chest. He rolled with it, the pistol grip fitting into his palm as if his hand and the weapon had been made together, one functioning unit. One part of his brain knew he’d been hit and hit hard, but the other part stayed ruthlessly focused outward, intent on doing what he needed to do. He fired toward where he’d seen the flash, the sound sharp in the crisp night air, but he knew only a rank amateur would stay in the same place so he tracked his next shot away from the shrubbery, following the barely seen black-on-black shadow, and pulled the trigger again.

His mind disconnected from the shock waves of pain rolling through his body because that was the only way he could function. His thoughts raced, analyzing probabilities and angles of fire, selecting the best option even as adrenaline overrode the devastation and kept his body moving. Without being aware that he was moving, he rolled behind a fireplug, and didn’t realize where he was until he was already there. A fireplug wasn’t much cover, but it was some.

His vision was wavering, things rushing at him then drawing back, as if pushed and pulled by an invisible tide of air. Peripherally, he was aware of entrance lights coming on, of curtains being pulled back as his neighbors peeked out to see what the hell was going on. He blinked fiercely, trying to stay focused. Yes—the increase of light brought a man’s form into dim view and he fired a third shot, controlled the upward kick of the muzzle, fired again. The dark form toppled to the ground and lay still.

God, his chest hurt. Shit. This had really fucked up his tattoo.

His vision wavered again, but he grimly held on, keeping his weapon trained on the downed threat. “Down” didn’t mean “out.” If he let go, let the darkness come, the other guy might get up and finish the job. Dead didn’t count until it was confirmed dead, and he couldn’t confirm shit right now.

But doors were opening, people were shouting. The sounds were distorted and strangely far away, the lights fading. Through the growing shadows he thought he saw some of the braver souls venturing out, investigating the gunfire. Words swam at him, around him, and some of them sank into his consciousness.

“Shawn! Are you crazy?” A woman’s voice, both angry and afraid.

“Just call the cops,” said a man—maybe Shawn, maybe someone else.

“I already did,” said a third voice.

“What the hell is going on?”

More noise, more voices added to the chorus as people began approaching, cautiously at first, then with more confidence when nothing else happened. Morgan tried to call out, say something, make any kind of noise, but the effort was beyond him. He could feel his breath hitching as the distant pain rolled closer, like a tidal wave that was about to swamp him.

This might be it for me, he thought, and was almost too tired to care. He tried to control his breathing because he’d heard that hitching sound before and it was never good. He didn’t have to hang on long, he thought—maybe half an hour, if people would get the lead out of their asses and get him to the hospital. But half an hour seemed like an eternity when he wasn’t certain he could hang on even one more minute.

He rested his head on the concrete sidewalk, feeling the chill of it. His outstretched hand was just resting on the winter-dead grass at the edge of the sidewalk and he had the distant thought that it was kind of nice to be touching the earth. If this was it for him, well, it sucked to go, but all in all this wasn’t too bad, considering all the grisly ways he could have gone.

But, damn it, he was fucking pissed because if he died, he didn’t know who had killed him or, more importantly, why.

Someone bent over him, a vague shape swimming out of focus. He had to send MacNamara a warning, and with his last ounce of strength he gasped out, “Ambush.”

Linda Howard is the award-winning author of numerous New York Times bestsellers, including Up Close and Dangerous, Drop Dead Gorgeous, Cover of Night, Killing Time, To Die For, Kiss Me While I Sleep, Cry No More, and Dying to Please. She lives in Gadsden, Alabama with her husband and two golden retrievers.