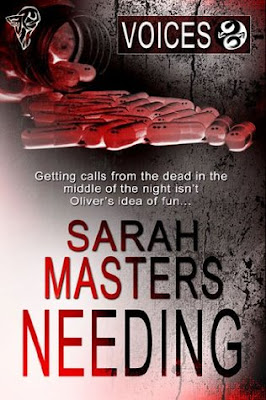 Oliver gets calls from the dead, imploring him to help them find their killers. He's heard them since he was a child and now assists the police in their investigations. He works closely with Detective Langham—and has steadily fallen more in love with him every day of the six months he's known him. But does Langham feel the same? Is Langham even gay?

When Oliver answers the call of a dead woman, he finds himself standing in a remote field, gazing down at her corpse. Someone else is out there with him, though, watching, waiting to cause him harm. After he's run off the road, Oliver has no choice but to aid Langham in finding her killer—no choice because more people are killed and more people call out to him…he's unable to ignore their pleas.

As the body count grows and the investigation becomes more complex, Oliver realises that Langham is indeed very gay—and out to make Oliver his.

Reader Advisory: This book contains scenes of excessive violence which some readers might find upsetting, including kidnap and imprisonment of children with enforced drug taking, mutilation of other victims, extraction of a foetus and implied child sexual abuse.

Getting calls from the dead in the middle of the night wasn’t Oliver Banks’ idea of fun.

He stared down at the body resting in the mulch, the limbs at odd angles. Her blonde hair, splayed against a backdrop of soggy leaves, stood out starkly in the beam of his pencil-slim flashlight. Christ, what kind of people did this to another human being? Crazy bastards, that’s who. Oliver had dealt with them before, had gazed down at bodies like this too many times to count, and here he was again, called out by the voices in his head and the unexplainable knowledge that someone had been murdered.

The woman, early thirties he guessed, looked as though she’d been out walking. Mud-encrusted hiking boots covered her feet, one tightly tied, the other undone, laces like rigid, dried-out worm skins. Had the killer been interrupted in taking the boot off? And why the fuck would he have done that anyway?

Oliver sighed. Sometimes it was pointless questioning the idiosyncrasies of the warped. Sometimes they just did things. No reason. Just because. He stared at the woman’s jean-covered legs. Mud splatters soiled the denim from the top of her boots to her thighs. Had she run through one of the many boggy areas in this now godforsaken field? Had she tried to get away from the bastard who had done this to her? Oliver hadn’t been given any details other than the site and the fact that a dead body was there. He’d hauled his arse out of bed then dressed quickly, stuffing his hair under a beanie hat.

He looked down at his battered Nikes. They’d sunk into the ground and would leave perfect imprints.

He shifted his gaze back to the woman, whose stomach was exposed, her black T-shirt bunched to just below her breasts. The perfect, taut skin showed the woman had taken care of herself, had maybe visited a gym regularly. What a damn waste of a life. Her jacket, a black windbreaker, the fronts open, would have done nothing to keep off the winter chill. She wasn’t wearing a hat or scarf, no gloves either, unless whoever had killed her had taken them away. Another oddity that wouldn’t surprise Oliver. Killers took the strangest trophies.

There were no marks on her neck or face, no obvious signs of how she’d been killed. No bruising, no knife wounds, no blood. If it wasn’t for her arms and legs clearly being broken, the woman might have appeared to have just fallen down and died. He closed his eyes, aware that morning would be here all too soon, that someone walking their dog might well discover the body. Or not. The recent rains had made this field treacherous, and if she wasn’t looked at soon by forensics and another burst of rain occurred, evidence would be washed away. Oliver had turned his ankle when traipsing over the field, a hidden pothole that he’d called all the names under the sun. If anyone chose to walk here, they were crazy.

"Were you crazy?" he asked, directing his flashlight beam at the corpse’s face. "Or were you brought here?"

Oliver swept an arc of light over the grass either side of the body. Yes, there they were in a patch of exposed mud, the footprints of the victim and also someone else. A larger size, undoubtedly those of a man. And it was always a man, wasn’t it? At least it had been in Oliver’s experience. The grass was trampled so much in places it had been ripped from the ground. The footprints, prominent in a large muddy swathe, were dotted about, but a mass of them, like two people had stood together and tussled, dominated one area.

"So you put up a fight." Oliver hunkered down and studied the woman’s nails. Pristine, acrylic, long. "But it seems you didn’t get to scratch him. That’s a bit of a shit, isn’t it?" He winced at his use of language. "I really ought to curb it, but fuck, it just pops out. See?"

Female laughter echoed inside Oliver’s head, delicate and sweet. At last, she’d made contact. He’d been waiting for it, had thought the victim would never break through again, but there she was, giggling.

"What kept you?" Oliver laughed gently, saddened that once again he’d be speaking to someone he’d never get to meet in life. Someone who would never use her body to help express herself. Someone who had been snuffed out just because another human being had decided that would be so. "Fucking arsehole."

The giggle came again, then a sigh. Then a sob.

"You see yourself here, right?"

Why did he insist on stating the obvious? Oliver sensed her spirit had just caught up with the recent events. That she’d realised she was dead, left in a field for someone to find or for a wild animal to feast on. Or to rot, never to be seen again, unless you counted bones. Not something anyone envisaged for themselves at the best of times, but there it was. A bold, cold fact of life. Sometimes people got offed and didn’t get a decent burial.

"Sorry if you heard my thoughts there. I really need to work on my empathy skills. Work on keeping you out when I’m thinking shit like that." Oliver switched off his flashlight, suddenly unable to look at the body now her spirit was with him. It wasn’t just a body anymore but a person, one who was in his mind and would hopefully help him track the killer. "Listen, you can either stay here or find someplace else to be, but if you reach out, I’ll be listening. If you want me to help, I can. It’s just that…" He glanced at the horizon, obscured by a line of gnarly, leafless trees. "I have to call this in so the cops can get you out of this shitty place. Your body, I mean. You? You’re free to go wherever you want, but like I said, if you need me, just reach out."

Oliver slid his flashlight in his jeans back pocket. Fuck, what he’d give to be normal, to have his mind to himself.

He’d burn his Nikes, buy a new pair. As usual. He hated wearing them again once they’d been worn to a scene.

This damn gig was getting expensive.

Oliver Banks and Detective Langham have murder cases to solve...with the help of the talking dead…

Sarah Masters is a multi-published author in three pen names writing several genres. She lives with her husband, youngest daughter, and a cat in England. She writes at weekends and is a cover artist/head of art in her day job. In another life she was an editor. Her other pen names are Natalie Dae and Geraldine O’Hara.

Posted by CrystalBee at 2:37 PM