Review: Rescued by Love (The Ryders #4) by Melissa Foster 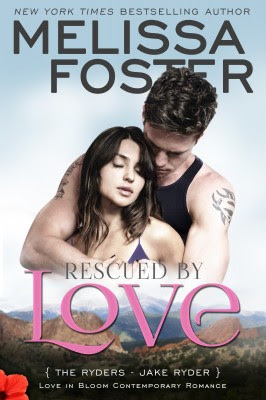 "We're playing by my rules now, sweet thing, and I see our future in your eyes." - Jake Ryder

Addison Dahl is excited to return to Elpitha Island for her best friend Gabriella’s wedding. A weekend of sun and fun is just what she needs before setting out on her newest adventure—roughing it in the wilderness. Addison is tough, she’s independent, and she doesn’t “do” feelings toward men. But lately her friend—and Gabriella’s brother-in-law—sinfully sexy and ornery-as-hell Jake Ryder has been the star of her late-night fantasies, and she can’t get him out of her mind. It doesn’t help that the chemistry between them is scorching hot. With any luck, a few days in the wilderness will snap that craziness out of her head.

As a top search and rescue professional, Jake Ryder spends his days saving those in need and
his nights in the arms of willing women who offer nothing more than a few hours of sexual
enjoyment. But there’s only one woman he wants, and he’s spent the last several months trying
to get beautiful, smart, and sassy Addison to give him one sinful night. He’s sure one night will
lead to more.

The night of the wedding the heat between Jake and Addy ignites, and they’re powerless to
resist their explosive passion. Wild kisses, sensual touches, and heartfelt conversations brings
them closer together, and when the weekend ends, Jake is determined to keep Addy close and
make her his. But Addy has other plans...

Believe it or not, I actually had a little bit of a difficult time with Rescued by Love. For the first time, Melissa created a heroine that I nearly didn't click with. I loved Jake Ryder. He's passionate, protective, and so damn sexy. As with all of Foster's men, he is immediately lured in by the woman he loves and all previous relationships fade off into the distance. From the minute his heart zeroed in on Addy, that was it. Addy, on the other hand, took a bit longer to convince. Don't get me wrong, I loved Addy's independence and her need to put herself first. Being put on a pedestal growing up and told "not to touch" gave her the craving to explore the world. I get that. Wanting to explore nature on her own for over a week? That I don't get. I spent the majority of the book wanting to shake some sense into her. By the end, I stood firmly on her side. I may not have agreed with how she got there, but the point is that she did. Both of them did.

As with all of my Melissa Foster reviews, I like to pick a word or phrase that best describes the book. It took me a day to come up with a word, but I finally did - tenacious. I feel like I've used the word before because it can describe any number of Melissa's characters, but it also works well for Jake and Addy. Jake's determination to win Addy over made me swoon. She jokes that he can be a little Neanderthal with his need to make her realize that they are a thing, but it works for him. Addy's need for the independence she never had as a kid fuels her tenaciousness. She's holding firm on to her plans for roughing it in her tight grasp and she refuses to give up without at least trying. And I admire her for that. While I may not have agreed with her actions, it wouldn't have stopped me from loving Rescued by Love. Yet another fabulous Foster book.