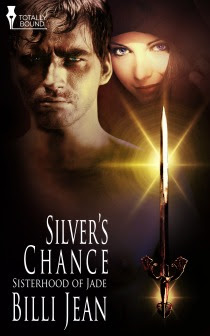 Within Derrick’s hot embrace, Samantha discovers being the hunted just might not be as bad as she thought.

Samantha is on a mission—to find her missing twin. But when her hunt leads her straight into the arms of an ancient Lykae warlord bent on marking her as his—and keeping her away from any possible harm—she’s forced to battle him, Death Stalkers, and her own attraction to the over protective, but sexy wolf.

Derrick is an ancient Lykae warlord tricked by the Death Stalkers and chained for centuries in one of their long forgotten halls. The last thing he ever expected was to be freed by not only a female, but also his mate. Now, new to this century and unsure of the reasons she denies their bond, hesd forced to fight by her side to win her heart.

As the battle to keep Samantha safe intensifies, Derrick faces the biggest fight of his life—winning Samantha's heart and proving to her that together they just might tame each other.

Jagged rocks dug into her arms and knees constantly. It didn’t much matter, but the sharp digs stung. She secured her balance and unclipped a glow stick from her pack. Maybe lighting up the place would help. Couldn’t possibly hurt. Steadying herself, Samantha snapped the plastic tube twice with one hand. Pink light flowed brightly into the gloom. Not wasting time, she dropped it between her legs. Two seconds later, the light bounced a few times and stilled on the bottom.

Not too far. Covering such a short distance would be a piece of cake. But had the silly thing hit rock bottom?

She still had to go down. Samantha took another minute to gauge the distance, held her breath, and pushed off the wall. Her boots hit solid ground almost before she registered the fall. Still in a crouch, she froze, but the only sound registering was the pounding tempo of her blood. Nothing went off, no alarm, no trigger she could detect.

Okay, good. Slowly standing, she was just about to take one cautious step on the uneven ground when a low crack vibrated under the soles of her boots.

Shit. Not good. So not good.

Between one frantic heartbeat and the next, the stillness of the cavern shattered.

Snapping, splintering sounds grew deafening around her. A quick glance revealed a fracture under the toes of her black boots. The splintering steadily branched out over the entire floor. An awful crack slashed through the air like a whip on flesh.

She barely had time to draw a breath, let alone react to the growl she heard, before the floor collapsed under her, taking her with it.

She slammed her eyes shut and tried like hell to picture her truck, attempting to shift herself out of the fall. If she could shift out of here, she might… Her boots hit hard ground, jarring her legs and shocking her out of her shift.

Her eyes sprang open, and this time, she knew she’d landed firmly on marble. Shards of rock crashed down around her. A cloud of dust billowed up, making her choke.

Feeling like she’d nearly coughed up a lung, she still managed to murmur a spell. Her swords landed in her palms almost before she’d finished the incantation to call them to her. Spinning in a circle, she tried to get her bearings, only to freeze at the sight facing her.

She spun her weapons in a pattern of defense against an army of Death Stalkers. Nothing happened. No one moved. Holding her breath, she tried to get her brain to work. It took a minute or two to realize each of the Death Stalkers facing her was a stone carving.

“Holy Hecate.” What was this place?

The Sisterhood of Jade stories introduce a world filled with immortals living side by side with mortals, but undiscovered—at least in the beginning.

As the tensions between the Death Stalkers—a brotherhood of immortals working to dominate the world—and the loosely banded together Immortal Council grow, so do the battles and bonds between the fractions.

The entire series will be on sale through Totally Bound.
To find out more, please click HERE.

Billi Jean was born in California but didn't stay put for long. She's lived in New York, Indiana, Missouri, Arizona, Colorado, Florida, Massachusetts and Vermont. She's lived in and worked from ranches to beach-side coffee shops to the woods in western Massachusetts. Now living and working in China, she continues to write for Totally Bound Publishing. 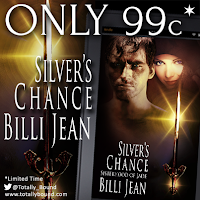