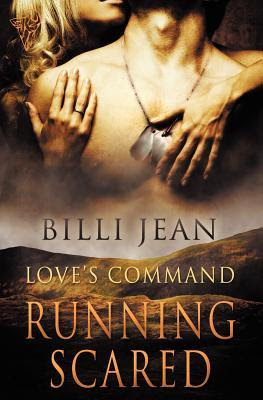 When a woman running scared runs into the arms of a sexy cowboy, she might lose her fear, but will she also lose her heart?

When a woman on the run hits a town right out of the Wild West, the first cowboy she meets sets his sights on her. Alone, scared, and starting over, Susan will have to decide if the big, bad Russell Ryland, retired Navy SEAL, now rancher, is for real or just using up his down time between missions.

Russell takes one look at the smiling, blue-eyed beauty and realises there's a heck of a lot more after retirement than he'd thought. As he begins to dream of a life with Susan, he fights an unfamiliar battle within himself-doubt. Does she want him, or is she merely out for some fun?

Time for the reluctant couple nearly runs out when the very men Susan is hiding from come to call. Will Russell wake up quickly enough to save her? Or will their doubts get them both killed? 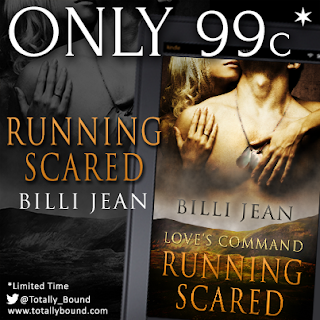 Full excerpt can be found on Totally Bound.

So here she was, standing on the side of a road on what looked like some crazy Wild West movie set.

Reality sucked. Delusions worked so much better—at least for about ten seconds. Lacey hadn’t witnessed a murder. She hadn’t been beaten to within an inch of losing her life. She hadn’t spent months in a hospital trying to breathe on her own. She hadn’t been forced to testify against some of the nastiest criminals in the world. She hadn’t been left out to dry like this, forced to move, alone, to a place so remote and far from normal she might as well have been on another planet.

The landscape facing her she was not used to. Big open grasslands, lined with the brilliant colours of fall foliage. Yellow and burnt cinnamon, deep green pines next to the white bark of some other kind of tree—beech or aspen, she didn’t know—all created a wildly beautiful picture.

The view gave her the creeps. Maybe she was afraid of wide-open spaces. Agoraphobia was a possibility.

Humour bubbled up and she rubbed her face with both hands. The map crumpled a little, reminding her of the brutal reality of her new life. She was running scared. Nothing was going to change that. Not standing here, not staring off at the mountains, nothing.

So many regrets washed over her. Tears stung her eyes—she felt like they were clogging her throat. Lacey fought them and ignored the deep hollow pit in her stomach.

She needed a plan. Action washed all the turmoil aside—always had. She’d always filled her life with action. Being forced to sit in a truck for days on end had driven her slightly insane, no doubt.

The real estate office in Troy couldn’t be too far. She’d find that, then her home, and see her new address for the next... Ah, God, who knew how long she’d be here?

And didn’t that thought put a huge dollop of pity into her pity-party sundae? Two blinks and the tears held off, so she focused on the mountains. The peaks looked white, possibly ten feet deep in snow by now. She could hike up to that snow; feel the cold on her face, maybe trail run along the ridges and ravines? They would be a challenge. Something to do. Later, maybe, after she’d settled in.

A truck slowed behind her, bringing the heartbeat she’d settled down to normal skyrocketing. What felt like ice water flooded her veins, while goosebumps beaded along her arms and a huge whoosh of adrenaline raced through her veins. The FBI agents had been clear: do not act anything but normal. What that meant, really, after all she’d endured, was a bit unclear. She didn’t feel normal in her own skin, let alone here in this wilderness. Besides, she doubted she would look normal to a small western town filled with redneck cowboys. She was a beach babe, had always been one, and didn’t think the changes of hair and scenery were going to make a difference.

Truck doors closed and she turned to face two guys—two cowboys, she corrected herself, taking in their jeans, rough looking tan jackets, scuffed boots and dusty black cowboy hats. Both walked over, and she panicked. What was she supposed to say?

They don’t look Russian. The thought ran a frantic circle in her mind, followed by, what does a Russian hitman actually look like? God, did he have to be Russian? Or even a he? A humorous hysteria built up, but she took a deep breath and clenched her hand around the map. She steeled herself not to take a step backward as both men walked right up, almost breaking her bubble of personal space.

Men, hardened by war, used to a life of death and dying, are each given an opportunity to find love. But will they listen to love's command, or will their years of war blind them to all love has to offer?

The rest of the series will also be discounted on Totally Bound's website.

Billi Jean was born in California but didn't stay put for long. She's lived in New York, Indiana, Missouri, Arizona, Colorado, Florida, Massachusetts and Vermont. She's lived in and worked from ranches to beach-side coffee shops to the woods in western Massachusetts. Now living and working in China, she continues to write for Totally Bound Publishing.