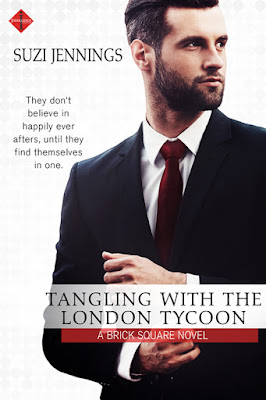 "A real woman appreciates a good sexy sway to a slow tune. You've got that nailed." - Kitty Mayfair

London publishing tycoon Rosco Redmond closely guards his family, his business, and his privacy. When his sister’s wedding brings the paparazzi baying at his door, wedding photographer Kitty Mayfair unwittingly becomes his decoy girlfriend. But the mysterious Kitty has secrets of her own.

Despite the sexy hint of an appealing Irish brogue, Kitty’s new boss is bent on micromanaging his sister’s wedding and the crazy fake relationship she’s been dragged into. The only thing they seem to have in common, is that neither of them believes in happy-ever-afters. But the more time Kitty spends with the tycoon, the more she begins to suspect there’s a lot of fire beneath his cool facade.

With the past complicating their present, and the zoom lenses of photographers everywhere they go, the commitment phobic control freak and the globe-trotting free spirit clash and ignite.

Suzi Jennings' Tangling with the London Tycoon was a fun way to spend an afternoon. The romance between Rosco and Kitty started off on the wrong foot. Rosco thought Kitty was a middle-aged photographer while she thought he was a paunchy, bald CEO. That couldn't have been farther from the truth and watching the realization light up their eyes was fabulous. That "whoops" moment played into the lightheartedness of their relationship while battling tough wounds. It's weird to say this about a romance book, but I liked that it wasn't all flirtation, all the time. It was just a lot of fun watching Rosco slip into the Irish rogue when he turns on the charm. He doesn't do it often, so it felt a little special. The flirting turned into a pretty hands on budding romance. I loved watching them face their inner demons and overcome their pasts together. Overall, it was a quick, fun romance and the start to a promising series.

Suzi Jennings lives in New Zealand and writes international stories of love and laughter. It all started in childhood when she discovered reading, scribbled stories about princesses in castles, and grew up to spend way too much money on books.

She writes contemporary romance where family secrets, powerful friendships and enduring loves heal hearts and forge happily-ever-afters. Her characters are feisty, flirty, fun - and talkative!  It’s a match made in keyboard heaven as Suzi is more than happy to listen.

When not writing she can be found on Pinterest, sipping creamy lattes, still dreaming of castles she’d love to visit