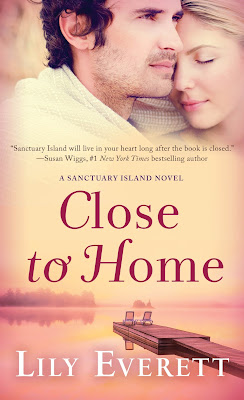 The best journeys take us home….

When Tessa Alexander came to Sanctuary Island, she left behind a marriage to a man who didn’t love her the way she loved him. When she finally found the strength to set them both free, she discovered friendship and self-acceptance in her adopted hometown. Now she’s settled into a quiet life on her own—never expecting to see her husband again.

Johnny spent almost two years deep undercover, unable to let his wife into his cold, dangerous world. He’s shaken to the core when he comes home to find her gone. It’s painfully clear that Tessa is no longer the timid young woman he married—she’s become a force of nature, a brave and determined beauty. Johnny can’t let her go without a fight so he sets out to seduce his own wife. But will passion alone be enough to convince Tessa that her new life should include a second chance at happiness with a man who must learn to believe in love?

Physical awareness flickered to life between them. Johnny felt the heavy beat of his blood, the sudden tightness in his jeans. Turning her hand under his, he stroked his thumb over the thin, tender skin at the in- side of her wrist where her pulse fluttered. She filled his mind, his entire consciousness. There was noth- ing but Tessa.

“You want more, honey? All you have to do is ask.”

She shivered, her eyes darkening as desire blew her pupils wide. Lips parting, Tessa stretched up on her toes over the horse’s back and Johnny didn’t care about the thousand-pound animal between them—he had to get his mouth on her, right now.

Spearing his hands into the short wisps of hair at the back of her neck, Johnny leaned in and kissed her.

The rest of the world fell away, leaving nothing behind but Tessa’s sugar-sweet mouth, the high, sur- prised noises she made in the back of her throat, the clutch of her fingers in the collar of his jacket as she pulled him closer.

He hadn’t kissed her since that first day. He hadn’t wanted to push her, or to make her think all he was interested in was sex.

That was a mistake. He should have been kissing her every day. Every minute.

Clover took a step forward, jolting them out of their embrace. The horse looked curiously over his shoul- der as Tessa started to laugh. It was the laugh Johnny had seen for the first time through the bakery window, full throated and joyous, with Tessa’s head thrown back in abandon.

Overcome with the need to seize this moment, Johnny grabbed the currycomb and threw it in the bucket before rounding the horse to snag his wife by the hand. Tessa looked up at him, breath coming in fast pants and eyes glazed, pliantly following where he led. It was all Johnny could do not to take her down to the sawdust-covered floor and hope Clover was smart enough not to step on them.

No. Tessa was untouched. She’d been waiting for this for a long time—and her first time wasn’t going to be a literal roll in the hay. But that didn’t mean either of them could stand to wait until they found a bed.

He reached for enough patience to get out of the stall and latch the door behind them. Dumping the bucket of grooming tools by the stall door, Johnny tugged Tessa by the wrist down the barn corridor to an empty stall he’d noticed earlier. It was unoccupied, completely clear of hay except for a few pieces strewn here and there, and Johnny backed Tessa into it for a little privacy. She went willingly enough, although he could see her brain starting to come back online, awareness of what they were doing starting to show in her eyes.

If he were a good man, he’d back off and let the sexual tension clear from the air between them. Tessa, who’d had so few choices in her life, deserved to make a real choice about this, one not clouded by overwhelming sensations. Johnny was at least a good enough man to vow not to take her here and now. He was relieved to find that he still had limits.

But that didn’t mean he could stop himself from providing Tessa with a damn good argument for why she should choose him.

Why she should choose them.

One smooth step forward had Tessa pressed up against the rough wood of the wall, his hand coming up to cup the back of her head and keep her from hurt- ing herself. He never wanted her to feel a moment’s pain, not if he could help it.

A soft smile pulled at her mouth. She turned her head far enough to nuzzle his arm, her gaze steady on his even as her cheeks flushed deep pink. She was irresistible. Johnny dipped his head, sipping kisses from her lips, small and sweet and playful to make her sigh. Her neck stretched, so vulnerably naked with- out the covering of her long, brown hair. The fingers of his free hand had to pet down the pale, slender length of it.

Tessa sighed into his lips, a breath with a hint of moan underneath—enough to vibrate through her throat against the sensitive tips of his fingers and reverberate through Johnny’s own chest. Hunger throbbed and ached between his legs, heavily undeni- able, but he ignored it for the moment. This was about Tessa. Tessa’s pleasure, Tessa’s awakening, Tessa’s beautiful, beloved, familiar-but-new body.

With a last swipe of his tongue across her plush lower lip, Johnny dragged his mouth from hers to nip his way down her throat to the juncture of her shoulder. He paused there to suckle at the soft skin, pulling up a mark that sent a heated pulse of posses- sion through him. Satisfaction rumbled in his chest as he trailed his hand from her neck to follow the path of his mouth lower, and then lower still. She shuddered when he reached the full roundness of her breasts.

Hungry for more but unwilling to expose her in this semipublic place, Johnny’s fingers shaped her through her thin sweater. He loved the way she shivered and peaked up, tightening into a bud he could feel . . . and needed to taste.

Johnny contented himself with wetting the fabric over the hard tip of her breasts, rubbing the knit weave of her sweater over the sensitive skin before enclos- ing her in warmth and pulling strongly enough to make her moan. High-pitched and shocked, the sounds Tessa let loose made Johnny groan with the need to restrain himself.

He knelt on the hard-packed dirt floor in front of her, forehead pressed to her softly rounded belly as he panted and worked to get control of the passion that wanted to run away with them both.
“Don’t stop,” she begged in a heated whisper he felt in every fiber of his body.

Johnny tilted his head up to meet her stare. Red- cheeked and wide-eyed, Tessa stared down at him. She looked nervous, excited, turned on—but she didn’t look as if she were too overwhelmed to make a real choice. Her eyes were clear.

He still didn’t want her first time to be in a barn. She deserved better than that. But there were many firsts for Tessa to enjoy, and Johnny could give her one right here.

Copyright © 2017 by Lily Everett and reprinted by permission of St. Martin’s Press.

LILY EVERETT is the author of the Sanctuary Island series for St. Martin's Press. She grew up in a small town in the foothills of Virginia's Blue Ridge Mountains and now resides in Austin, Texas, where she writes full-time.