Spotlight: Under Her Skin (Blank Canvas #1) by Adriana Anders 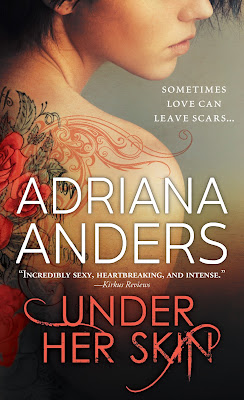 Battered by a life determined to tear him down.
This quiet ex-con’s scarred hands may be the gentlest touch she’ll ever know.
…if only life were a fairy tale where Beauty was allowed to keep her Beast

Ivan thought the world was through giving him second chances. Who’d want a rough ex-con with a savior complex and a bad habit of bringing home helpless strays? Everyone in Blackwood, Virginia knew he wasn’t good enough for the fine things in life; they knew he was too damaged to save. He just needed to keep his head down, work himself to the bone, and pretend he was content with the lot he was given.

Until she came into his life. Until she changed everything.

Until he realized he would do anything, fight anyone, tear the world apart if it meant saving her.

“Hey, Uma. What’re you doin’?” His voice was beyond gravelly, into some deeper key that wouldn’t have been audible more than a couple of feet away.

“Got a standin’ date Saturday night—with my nephew.”

“Oh.” That was a relief. All that jealousy for nothing. “Can I come in?”

It was almost insulting how long it took him to decide, but he eventually turned and preceded her into the room, pulling up the form-fitting boxer briefs that had ridden low on his haunches. Squeak, asleep in front of the fire, barely lifted her head in acknowledgment of the new arrival. It smelled different tonight. No longer a workshop, it had that slightly musky, sleeping-man scent. The one you don’t notice when you wake up to it but have to air out if you reenter a bedroom. It softened the usual fire and brimstone of the place.

Uma’s eyes scanned his shadowed shape, and the word voyeur popped into her head. Rory was right. It made so much sense. She’d always spent time with people who had to be the center of attention—her mother growing up, then all those drama department friends in school whose friendships hadn’t withstood Joey, and then Joey himself. It was a rare moment of insight to realize what a parasitic relationship she’d had with those people. All of them. No, not parasitic—symbiotic. They’d craved the attention, and she’d thrived off giving it to them.

This man, self-sufficient to the extreme, didn’t want anything from her. Or at least nothing complicated.

“Did you mean it when you said you’d do whatever I wanted you to do?”

A brief hesitation, then a slightly breathless, “Yeah.” Another pause. “You drunk?”

She shook her head, and it was as clear as a bell. Clear and calm and supremely focused. “I drank enough to give me courage, but the walk home sobered me up.”

“Where’d you walk from?”

“The Nook,” she answered, recalling Rory’s words about this little section of town. Cell Block Eight. “You went to prison.” It was more of a question than an accusation.

He tensed up at that but didn’t deny it.

“Were they good? Your reasons?”

“Thought so at the time.” In the middle of the room, he looked away and turned back to her. Ivan rubbed a hand over his eyes and spoke wearily, “What can I do for you, Uma?”
Something came over her. That inner voyeur, once identified, had taken on a life of its own. Here, with a half-naked Ivan, its pull was strong, deep in her bones.

I want to see you.

She wondered what it would take to get him to pull his underwear off.

“Take off your shorts.”

Uma thought the words and then they were out, charging the air between them. Positively zipping with energy. A barometer in that room would have swung wildly in both directions, unsure whether to settle on Stormy or Electric. Either would have suited her fine.

She was fierce, wide awake, as she watched first surprise, then awareness overtake Ivan’s features. His chest rose and fell, the sounds coming from him grown harsh.

He was measuring her, she could tell, trying to figure her out. She saw the exact moment he decided to give up.

Smart man. It was a lost cause.

“Come closer,” he said. So Uma could see him better? So he could get a clearer look at her? So he could touch her? She wasn’t sure she could take him touching her, but she gave him three small steps.

Still a ways from the rumpled bed in the corner, he stood beside his anvil, shirtless in the half-light. She wished he’d pick up the hammer and make the sparks fly again. She wished for bared teeth to go with the dark smattering of fur across his chest and arrowing down into his waistband. Uma wanted him feral, a beast she could tame. Would he bite her if she let him?

Her gaze slid down his body, taking in the long lines marred by gentle whorls of dark hair and the occasional scar. Thick thigh muscles wrapped in white, white skin. Their heft excited her. Her nostrils flared with some strange, animalistic desire to bite him.

Oh, that. That notion was right.

“Will you take your shirt off?” he asked.

She shook her head. “No.” It didn’t even sound like her voice—harder, surer.

A strangled little half sigh escaped his mouth, and Uma felt for him; she really did. Only she wanted so badly to see him that she couldn’t let him off the hook. So she waited.
And then he did it.

Adriana Anders has acted and sung, slung cocktails and corrected copy. She’s worked for start-ups, multinationals and small nonprofits, but it wasn’t until she returned to her first love—writing romance—that she finally felt like she’d come home. Today, she resides with her tall French husband, two small children and fat French cat in the foothills of the Blue Ridge Mountains, where she writes the dark, gritty, steamy love stories of her heart.