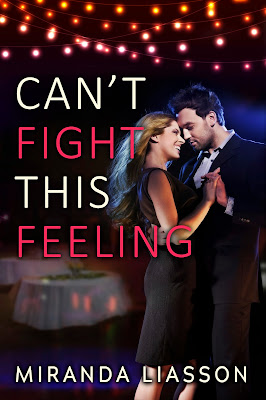 SHE WANTS TO MOVE ON…WITH SOMEONE BLAND AND BORING…

Widowed psychologist Maggie McShae is ready to find someone who won’t make her heart beat fast, her knees grow weak, or make her feel hot and cold at the same time. No one she can really love, because love brings too much pain.

Drew Poulos, son of a billionaire, is hiding out in Mirror Lake, working at his brothers’ brandy company. He inspires those very feelings Maggie’s determined to avoid. The hunky businessman, who left his high society bride at the altar, is the last person she’d ever seriously date…but he might just be perfect for a fling…

Drew’s too heartbroken to ever trust any woman again, but the sexy psychologist is the perfect person to deflect his family’s attention as his brother marries the woman Drew once thought was his.

As sparks fly, two injured hearts might just find that true love can be even better the second time around….

He got in her face. And oh, those big brown intelligent eyes up close, those chiseled cheekbones, so much more defined than her own, which really were such a waste on a man. That thick, pitch-black hair, so thick a woman’s fingers could get lost in there.

She tried to back up a step, but he moved forward. “Maybe. Let’s start by being honest with each other. Do you want me, Maggie?”

“We’re not talking about—that. Back off already.” She pushed on his chest a little. A mistake. Because it was hard as boulders and made her knees go weak. “Besides, you just—flinched when I touched you.”

“I think we need to do what you said, talk about it. I flinched because I felt what I think you feel too. That there’s something going on between us. What are we going to do about it?”

She flipped her hand dismissively. “It’s all that touchy-feely stuff we’re doing in front of your family. That has to stop.”

“This has nothing to do with playacting,” he said quietly. “And I think you know that. “That kiss on the court… It was real.”

“That kiss was…impulsive. Heat of the moment, fueled by our hard-won victory.” Joking now was not stopping the shivers that were running up and down her arms. Or the hot and cold coursing through her veins. Somehow, she sensed how it would be between them. Wild. No holds barred. And God help her, she wanted that.

She tried to pull some common sense out of her sex-addled brain. It would be a very bad idea on both their parts to forget their troubles with a sweaty round of sex, wouldn’t it? 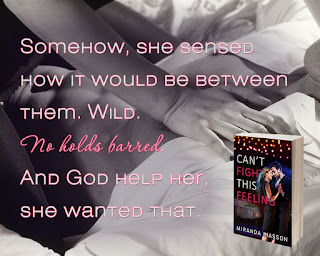 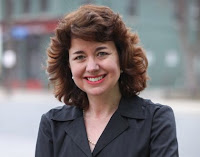 Miranda Liasson loves to write stories about everyday people who find love despite themselves, because there’s nothing like a great love story. And if there are a few laughs along the way, even better! She’s a former Golden Heart winner who writes contemporary romance for Montlake Romance, Entangled, and soon for Grand Central. She lives in the Midwest with her husband, three kids, and Posey, a rescue cat with attitude.