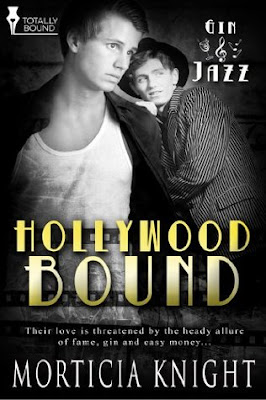 It’s the silent film era of Hollywood, and young, innocent Jack fights for love amid the heady allure of fame, gin and easy money.

Nineteen-year-old Jack has secretly loved the older, and more streetwise, Nick from almost the moment he first met him. After being beaten then thrown out of his orphanage for kissing another boy, Jack fled to the big city of New York, and it was Nick who found Jack and took him under his wing. Nick gets them a job in a Vaudeville Theatre on Broadway, where making ends meet is a constant struggle and dreams are cheap. But a shared passion for silent film soon fuels their hope of a better future, sending them west to Hollywood where they can make their fortunes building sets for the movies.

Nick’s temper sometimes gets the best of him, but that’s only because he worries about Jack. Nick is all the poor kid has in the world. But something about Jack is stirring feelings deep inside that terrify him—feelings he should only have for his fiancé, and never for another man.

To top it off Hollywood isn’t exactly what they’d thought it would be. There are plenty of gin joints, jazz, money, parties, drugs and sex—but everything comes with a hefty price. From a ditzy flapper and starlet, to the studio bosses who can make or break them—everyone has a hidden agenda. Can the newfound love between Jack and Nick survive the tawdry mess that makes up the glitz and glamour of the celluloid kingdom, or will their own secrets tear them apart forever? Follow Jack’s journey to true love that begins with Hollywood Bound.

Publisher's Note: Please note, this is the first book of a four book serial and is part of a continuing story line best read in sequence.

"Nick. Give me five cents. I need a cuppa joe before we head to the theatre."

Jack smiled and elbowed Nick in the ribs. They were at the far end of the counter on the swivelling stools Jack loved so much. Every time they had a few extra cents in their pockets—which wasn’t often—they would head on over to Huyler’s Diner in midtown. It was close enough to the vaudeville theatre where they worked, just off of Broadway.

"Would ya quit spinnin’ around on those things? You’re acting like a kid."

Jack frowned at him. Nick was four or five years older than Jack, but he acted like he was really something. All worldly and such. At the same time, Jack really admired him. He knew about things and always watched out for him. Nick had been there for him after he’d been kicked out of the boys’ orphanage in Buffalo. He’d only been sixteen and hadn’t known what to do or how to take care of himself. Nick was the best friend he’d ever had. And since he had no family, he guessed Nick qualified as that too.

Nick snorted and took another drag of his cigarette. "A man. Sure ya are, kid. Here’s a nickel, get yourself some coffee. It’ll be a late night. We have to tear down all of the sets, and put up the new ones. The next show starts tomorrow."

"Aw, shucks. I was hopin’ we could go out tonight to the Red Head. I know someone who’ll let us in. Plus, Mr Pearson swore he’d pay what he owes us from the last show."

"Shee-it. The last time we went to a speakeasy, the place got busted. You wanna end up in the black mariah again? We’re supposed to be savin’ every penny to make it out west. I know it’s hard when everyone else seems to be living the easy life, but we have a chance to make it really big out where they make movin’ pictures—just like we’ve been dreamin’ about."

"Geez, Nick, I don’t know. I still think we got a good enough job here. We make all right money. And I don’t know nobody out there."

"Yeah, but what about that gal you’ve got back in Philly? What if you decide to marry her and leave me behind?" Jack’s voice got softer. "You always said you’d have to do that someday."

Nick didn’t answer. He looked straight ahead at the mirror behind the diner’s counter, worry etched on his brow, a cigarette held to his lips. Finally, he seemed to snap out of it.

"Yeah, well, I don’t wanna talk about it. I’ve put her and my folks off this long. They can all wait a little bit longer."

Jack motioned to the waitress and asked for some coffee. He didn’t want to bug Nick about it, but it bothered him a lot. One time Nick had said that he would send for her when they got out west, but then he’d never brought it up again. Jack worried that once Penelope got in the picture, Jack would be out of it.

But it’s only right, ain’t it? Every guy has to get his own family one day. We can still be friends.

If only friendship was all that Jack wanted from Nick. He had been in love with him for a while, but didn’t dare say or do anything about it. That was the kind of stuff that had got him pushed out the doors of the orphanage. If it hadn’t been for Father O’Malley intervening, he might have been beaten to death by the other kids. He’d been half-beaten as it was.

He and Stanley had been playing with each other since they were both fourteen. That was what Jack had called it, and Stanley had said he thought it was okay because they weren’t going after girls. Stanley wasn’t super smart, so one day he’d told the other boys about his and Jack’s playtime when they were complaining that there weren’t any gals around. It had got Jack a one-way ticket out the front door. But not before he’d received a good beating too.

"You go out to the big city, Jack Stone. Things’ll be much better for you there."

He’d said that there were places like pansy clubs that accepted guys like him. These were modern times, he’d explained. Nineteen twenty four—people would be more open and liberal from now on.

So far, Jack agreed that it was much better in New York City, but only if you hung out with the right crowds and went to the right places. But that was only from what he’d heard. He knew Nick didn’t go in for that sort of thing, and he wouldn’t dare do anything that Nick didn’t like.

He’d met Nick at the bus station when he’d first arrived. Father O’Malley had given him just enough money to get to the city and to buy a couple of meals. Jack hadn’t had a clue how he was going to survive beyond that. Having just arrived from Philadelphia to work over the summer with his uncle who ran a vaudeville theatre, Nick had quickly taken Jack under his wing. Jack still thought of it as the luckiest day of his life. Within a few short days, he’d had a job as a set-builder and painter at the Atlantic theatre run by Nick’s uncle, Fred Milton. As it turned out, after the summer ended, Nick suddenly didn’t want to go back to Philly, although he never really had a reason why.

But more than anything, it seemed Jack had Nick’s support no matter what. Tall, lean and with muscles born of hard work, Nick also had brown wavy hair that parted at the side and swooped down over his hazel eyes. Jack thought he was very handsome. Sometimes he fantasised about what it would be like if there was no Penelope, and Nick wanted to be with him like a woman. Sometimes he even thought that he could see it in Nick’s eyes, the way he stared at Jack, then quickly looked away.

The young brunette waitress placed a cup of salvation down in front of him and winked. He’d had plenty of days where he’d lived off of just coffee and cigarettes. He’d stir in cream—not because he liked the taste—but so he could convince himself he was getting something more, like real food. Besides, it was free. The worst had been when Nick’s uncle had died. The theatre had been shut down, and he and Nick had ended up on the streets for a couple of weeks. It had been a very frightening time. Besides not having jobs and running out of money, Nick had started hinting around that it might be time for him to head back to Philly and take up with his betrothed. That had been over a year ago, but Jack still shivered when he thought about it.

Luckily, Mr Pearson had bought the closed theatre and rehired most of the people who had worked there before. In addition to set-building, they were also stage hands during the shows. It was terribly exciting, but more recently, he and Nick had become obsessed with silent films. They’d spent more of their money than they should have to go and see such wonders as Sherlock, Jr. and The Love Nest with Buster Keaton, and Jack’s favourites, The Thief of Baghdad and Robin Hood. That was where the seeds of the idea to head west had been planted.

The 1920’s are filled with gin, jazz, and the promise of easy money. When the young and innocent Jack heads to Hollywood with his best friend and lover – he believes that everything will be magical for them. They just need to stick together, no matter what.

The celluloid kingdom demands a hefty price from all who want a piece of the dream. Sacrifices must be made if you want to be a part of the glitz and glamour. Flappers, screen idols and the men behind the star-making machine all conspire to interfere with Jack’s happiness. Along the way, many of Hollywood’s players discover that unfortunately, sometimes dreams do come true.

Hollywood continues to roar in the 1920’s as the men from Gin & Jazz search for love and meaning in the town of broken dreams. A studio chief wishes for a man to dominate, one that he doesn’t believe exists. A director can’t see the actor in front of him who was meant to be his. A fallen screen idol is lost in his own despair until a new playwright shows him the way to true happiness.

These are the men who struggle and work hard to make their mark upon the silver screen. The one thing they all have in common is the need to be loved, and the hope that someday love will find them.

Morticia Knight spends most of her nights writing about men loving men forever after.

If there happens to be some friendly bondage or floggings involved, she doesn’t begrudge her characters whatever their filthy little heart’s desire. Even though she’s been crafting her naughty tales for more years than she’d like to share – her adventures as a published author began in 2011.

Once upon a time she was the lead singer in an indie rock band that toured the West Coast and charted on U.S. college radio. She currently resides on the northern Oregon coast and when she’s not fantasizing about hot men she takes walks along the ocean and annoys the local Karaoke bar patrons. 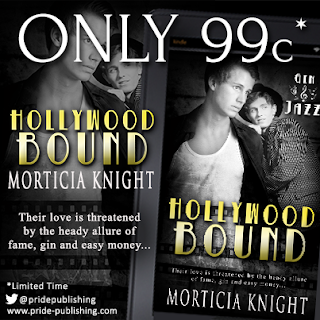