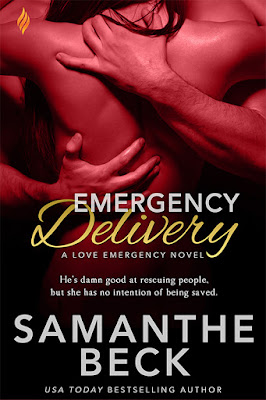 Madison Foley is determined to stand on her own two feet, no matter how wobbly her circumstances. Fate, however, keeps throwing her off balance, and then sending heroically hot paramedic Hunter Knox to save her.

She’s put men on the back burner until she gets her life on track.

But Hunter’s got other plans. 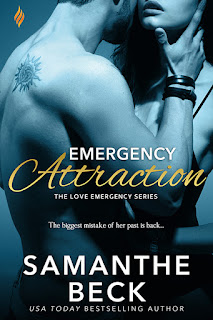 Ten years ago when Shane Maguire chose the Marines as his escape from some trouble of his own making, he only regretted one thing—leaving Sinclair Smith behind. Despite his best intentions, she ended up as the one that got away. Now he’s back, determined to reclaim everything he gave up, including Sinclair.

Sinclair is immune to Shane’s charms. She’s immune to stolen kisses behind the gym. And she’s definitely immune to that maneuver he did in the back seat of his car… Okay, maybe her hormones are susceptible, but she has absolutely no desire to risk anything on the bad boy who broke all his promises.

When a little emergency lands her at his mercy, he offers her a deal she can’t refuse. And this time, she’ll show Shane what it means to be left wanting…

“How about this, Sinclair? Do you hate this?”

“Uh-huh.” Her hands shook as she tugged his fly open. “I hate it…” And then she was holding it, stroking, relearning landmarks the years had subtly altered—the smooth, blunt tip, the sensitive opening that still dragged a groan out of him when she explored it with her thumb, the flare of flesh marking the transition from head to shaft. It wasn’t until she’d wrapped her hand around the thickest part, wringing another low sound from his throat, that she realized the pressure in her chest was building to match the pressure at her core. Longing took many forms, and all of them were about to have their way with her. And she wasn’t strong enough to stop any of it. Gripping his hips for balance, she dropped to her knees. “I really hate it,” she said again, then put her lips against the tip.

His head dropped forward, and his fingers tangled in her hair. “Jesus. Show me. Punish me.”

She took him into her mouth, leading with her tongue, stretching her lips to surround him. Taste and scent unleashed vivid, sensory flashbacks…the thrill of discovering every mysterious inch of him, the pride of making him tremble for her, the joy of hearing him say her name over and over again as he lost control. The memories stung her eyes and tightened her chest. Then he groaned and gave a rough, potentially involuntary thrust. The move generated heat, and friction, and raw new needs.

Desperate to satisfy them, she planted her knees, tipped her head to the most accommodating angle, and offered him everything. Just the way she’d learned to do during those long spring nights a lifetime ago.

“Fuck, Sinclair.” He gripped her chin and stared down at her. “You have no idea how much I missed you. You couldn’t possibly. Leaving you felt like losing a vital organ.” Then he thrust again, and again, in rapid succession. She’d braced for fast, and deep. Wanted it. But he remembered a few things, too—like how easily he could reduce her to a quivering mess by holding back, teasing her with quick, shallow strokes. Punishment, she discovered, cut both ways, and could be unbearably sweet as well as heartrendingly painful. Despite his restraining hand, she went deep, gorging herself on all of it—past, present, sweetness, pain…him—knowing full well it was too much, but still would never be enough.

A sob pushed its way into her throat. She choked it back and hoped he attributed the artless noise to her overeager struggle to take as much of him as she possibly could. His big hand stroked her jaw. “Easy, baby girl,” he murmured and then sliced her heart open with one careful fingertip, running it over her lips, tracing the seam where their bodies met. How had she forgotten the way he did that? Or how one simple gesture could make her feel so…cherished?

Except he’d taught her she wasn’t the kind of girl men cherished, and now he’d come back and undermined the lesson with a single explanation. How dare he? Because in doing so, he also took away her justification for distributing blame for what happened that summer to him, which meant she had to accept it all. “I hate you,” she said, reminding him, reminding herself, and then lowered her head to finish him. Exorcise him. Claim one harshly honest moment and be done with him.

But a strong arm hooked under her shoulder and hauled her up until her face hovered just millimeters from his. Her lips throbbed from the friction of his cock sliding between them. His taste coated her tongue. Deprivation set in, sudden and painful, but maddeningly patient green eyes stared into hers, taking stock, unquestionably seeing the deprivation, and the need, but looking past them to things she didn’t want him to see. Didn’t want anyone to see.

When not dreaming up fun, fan-your-cheeks sexy ways to get her characters to happily-ever-after, she searches for the perfect cabernet to pair with Ambien.