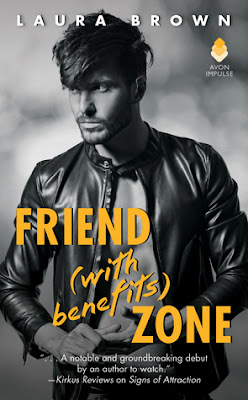 "How soon after a date can I ask you to be my girlfriend?" - Devon

Today is a bad day. The worst actually. After dealing with the constant manhandling that comes with being a cocktail waitress at a dive bar and surviving a date from hell, I see an eviction notice slapped on the door of my sketchy basement apartment. Great.

When my best friend Devon shows up at my door and uses his stubborn charm (emphasis on stubborn) to get me to move in with him, I give in. We’ve had about a million sleepovers since we met in the kindergarten Deaf program, but this time it’s different because I can’t stop thinking about his hard body covering mine, every single night.

I know Devon would do anything for me, but I’m afraid what I want to happen will ruin our friendship forever. And the more time we spend together in close quarters, the harder it’ll be to resist the spark of attraction I’ve always felt. But maybe it’s possible to have the best of both worlds: keep the one relationship I can’t live without and indulge in an attraction I can’t deny.

I guess the only thing we can do is try…

After discovering Eden Summer's Inarticulate last year, I've been drawn to romances with characters having a speech impediment or hearing loss. For example, the hero in Summer's Inarticulate is mute as a result of a debilitating speech disorder. Earlier this year, I read Live Out Loud by Marie Meyer, which features a deaf heroine. I'm drawn to the emotions surrounding the communication barrier between the main characters. The stages that each character goes through while falling in love with someone that communicates using a different language. It can range from shock to frustration to acceptance to finally love. And following that journey between them is just as rewarding for me as it is for them.

When I came across Laura Brown's Friend (With Benefits) Zone, I was initially drawn to the book for three reasons. The first being an own voices romance. This was my first time reading one and I was intrigued. Not going to lie, the second reason was the cover. Holy cow, how could I resist him? The last reason (which was actually the main reason why I wanted to read this book) was that both main characters, as well as a handful of background characters, are deaf. I knew that they would communicate using ASL. What I was curious about was how would that translate to the reader. Could I picture them signing? American Sign Language is an incredibly expressive language. Would that translate well in a romance? The answer to all of my questions was a resounding yes. I could picture how expressive Devon and Jasmine would be, especially when they they argue and are intimate. That alone made me want to devour this book.

I think the element of Friend (With Benefits) Zone that I loved the most was the awkwardness between Dev and Jas as they took their friendship a step further. With a lot of friends-to-lovers, readers miss out on that awkwardness. That first kiss... The first time having sex... It's going to be all kinds of awkward and I loved that Laura didn't skip over that stage in their relationship.

Friend (With Benefits) Zone was beautiful written. The characters were well developed. There were times when they broke my heart and times when they made it soar. Jas is a strong, yet very stubborn woman. After the death of her father, she lost everything. Because of that, she's afraid to love in fear that it'll be taken away. Jas doesn't know how to lean on someone and to let people help. Devon was born to help people. He doesn't know how to show Jas that just because he wants to help it doesn't make her weak. Instead, it makes her stronger. I fell in love with them from the first page. They kept me up reading until the wee hours. I couldn't put this book down. In fact, Laura made me ugly cry at 2 o'clock in the morning. I loved this book and I cannot wait to read more from Laura Brown.

Laura Brown lives in Massachusetts with her quirky abnormal family. Her husband’s put up with her since high school, her young son keeps her on her toes, and her three cats think they deserve more scratches. Hearing loss is a big part of who she is, from her own Hard of Hearing ears, to the characters she creates.