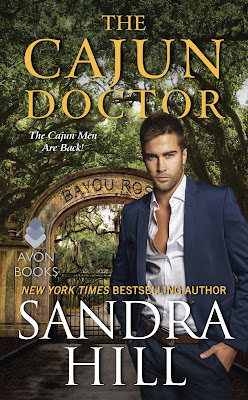 Dr. Daniel LeDeux and pilot Aaron LeDeux travel to the swampy bayous of Louisiana, where they discover a long-lost family. The usually stoic Daniel, a burned-out pediatric oncologist, is especially startled by the interfering LeDeux matriarch, Tante Lulu, bless her crazy heart, who wastes no time in setting him up with local rich girl Samantha Starr.
Scarred by a nasty divorce from a philandering New Orleans physician, Samantha has sworn off men, especially doctors. When Samantha’s step-brother gets into serious trouble, she must ask Daniel for help. But Samantha faces even more trouble when the handsome doctor casts his smoldering Cajun eyes her way.

The steamy heat of the bayou, along with the wacky matchmaking efforts of Tante Lulu, a herd of animal rescue rejects, including a depressed pot belly pig, and some world-class sexual fantasies create enough heat and humor to make both Daniel and Samantha realize that love and laughter can mend even the most broken heart.

She smiled at him as he stood to follow her. There were no longer any tears in her eyes. Forget about sparkling emeralds, he decided then. Her eyes were murky green pools designed to lure a guy in and make him do things he didn’t even know he wanted to do. And he was the dumb trout who’d taken her bait. Hooked, lined and hot damn sinkered!

It was probably some Southern voodoo kind of crap. Maybe he should ask Tante Lulu for a spell to ward off Samantha’s allure. He could only imagine the old bat’s reaction. She’d be calling for a fais do do, a party down on the bayou, and the theme would be, “Daniel LeDeux Ain’t Gay, hallelejuah!”

But then he watched Samantha’s buttocks move in the red silky pants as she walked out of the room. Was there anything prettier than a heart-shaped ass on a woman? And he decided, maybe not. And those long limbs . . . man, what a creative male could do with those!

Hot damn hell! He decided he could live with the spell or whatever the hell it was, thank you very much!

Any lewd thoughts he might have been entertaining were interrupted abruptly by a loud pounding on the front door. They looked at each other in question.

He arched his brows.

The dog halted in its tracks toward the kitchen.

The pig raised its head and sniffed the air.

Then they all erupted with their respective sounds of alert. Barking, growling, meowing, and oinking. A female squeak of dismay, as in, “Oh, Rhett, the Yankees are comin’!” A male grunt of disgust, as in “What next?” All of which alerted the bird to voice its opinion, and the puppies and other cats to join in the chorus.

More pounding on the door.

“Let’s just ignore it,” she whispered.

The German Shepherd let loose with a wild howl that could probably be heard a block away, definitely through a measly door. Then the old dog lay down on the floor, its muzzle between its front paws, all tired out from the effort.

“I doubt whoever is there will just go away. Let me handle it,” he offered, also in a whisper. I gotta get my Rhett on once in a while, he joked with himself. Then, he added, “Do you have a gun?”

“No. Damn, I knew I should have bought a gun. Just this evening I decided to ask Tante Lulu if she had an extra one. But I didn’t have a chance to call her yet.”

He gave her a glance of surprise; he hadn’t been serious.

That’s all he . . . she . . . needed. Southern belle with a pistol. She’d probably shoot her eye out. At the least, everyone up and down the bayou would know about it, thanks to the Mouth of the South.

Daniel was beginning to feel like Alice in Wonderland . . . or rather, Alex in Wonderland . . . and he’d fallen down some crazy-ass Southern rabbit hole. Forget Scarlett O’Hara. His Alice would be wearing some silky red short shorts. And high heels. And nothing on top. And “Pretty Woman” would be playing in the background.

He could hear Aaron laughing in his head. Twins were like that sometimes. They shared long-distance thoughts and feelings. In fact, some scientists claimed that even during sex . . . well, never mind! Suffice it to say, it gave new meaning to multiple orgasms.

To the Aaron in his head, Daniel said, Hey, it’s my fantasy. If I want bimbo Alice, I get bimbo Alice.
More Aaron laughter.

Daniel and Samantha walked softly toward the front door where Samantha peeked through the security hole and declared in a whisper, “I think it’s the mafia.”

He pushed her aside to look for himself. What he saw was two men, their faces distorted through the fisheye lens in the peephole. They were scowling with impatience at their knocking not being answered. Definitely not Welcome Wagon, or Jehovah’s Witnesses, or a passing traveler in need of directions. No Gone with the Wind Yankees, either. The short one wore a tight “Sleep With the Fishes, Motherfucker” T-shirt over a muscular chest and bulging biceps; there were tattoos on his neck and forearms. The other dude . . . taller, but equally muscular. . . wore a T-shirt with the logo “Pit Bulls Rule” under an open denim shirt. There was a livid scar on his cheek that lifted one side of his mouth in a perpetual grin. The Mutt and Jeff of creeps!

Daniel could swear he saw the shine of a pistol under the denim shirt. He amended his assessment to “the Mutt and Jeff of dangerous creeps.”

“Samantha Starr! You in dere, chère. We doan want no trouble here. Jist open the door, yes.” This from Mutt, the short one.

She shook her head.

Daniel wasn’t convinced that her way was the best way, but there was no time to argue. He kicked off his shoes, toed off his socks, and used both hands to mess up his hair. He tugged out his T-shirt that had been tucked inside the waistband of his jeans. As an added touch, he undid the button on the fly of his pants and zipped down halfway.

“What are you doing?” she asked in an undertone.

“Pretending I was in bed.”

He put a forefinger to his lips, signaling silence, then put the security chain on the door and opened it several inches. “Yeah? What do you guys want?” he snarled at the two figures on the doorstep.

Surprised, they backed up a step. They had to have seen him enter a short time ago, but apparently they hadn’t been expecting a man to answer the door, or him in particular, as evidenced by Mutt’s remark, “You ain’t Angus Starr.”

But the taller, scar-faced dude, Jeff, stuck his booted foot into the opening. “Wait a fuckin’ minute. Where’s Samantha Starr? Bet she knows where that stupid-ass brother of hers is, guar-an-teed.”

“Angus isn’t her brother, exactly,” Daniel commented, as if that mattered. “He’s actually the son of one of her father’s—”

Scar-face made a growling noise.

“Why do you want Angus anyway?”

“None of yer damn bizness, you!” Mutt said, putting his hand inside his pants pocket, as if reaching for a weapon.

Stepping behind the door, he acted quickly. Messing Samantha’s hair into a sexy mess, he pressed her up against the wall and, before she could yell or kick him in the nuts, he leaned down to kiss her, hard and deep, even nipping at her bottom lip so that she would open for him.

Then he forgot why he’d made a move on her.

Sandra Hill is a graduate of Penn State and worked for more than ten years as a features writer and education editor for publications in New Jersey and Pennsylvania. Writing about serious issues taught her the merits of seeking the lighter side of even the darkest stories.