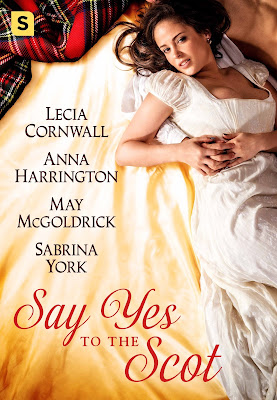 You are formally invited to the Highland wedding event of the year. These four lasses are about to meet their matches in an original digital anthology featuring stories from New York Times and USA Today bestselling author Sabrina York, Lecia Cornwall, Anna Harrington, and May McGoldrick.

HOW A LASS WED A HIGHLANDER by Lecia Cornwall
In this retelling of The Princess and The Pea, Laird Alex Munro of Culmore has just five weeks to find a bride and marry her...or else the clan will be cursed with ill luck. Cait MacLeod finds herself caught in a clan feud, and when she tries to stop a deadly raid, she ends up as Alex Munro’s prisoner. With timing running out, is this couple meant to be?

A MATCH MADE IN HEATHER by Anna Harrington
She was the laird's daughter. He was nothing more than a penniless, nameless Scot with nothing to offer but his heart. Fate tore them apart, but now he's back in her life with status, money and a title. Can they let go of past hurts and find love?

A MIDSUMMER WEDDING by May McGoldrick
Their marriage was two decades in the making. The young, educated woman and her highland, pirate husband, betrothed when they were still children. But on the day of their wedding, Elizabeth Hay and Alexander Macpherson are in for a surprise.

THE SCOT SAYS I DO by Sabrina York
Catherine Ross's world is turned upside down when her brother gambles away every penny they own. But to make matters worse? He’s lost everything to none other than Duncan Mackay, the rugged Scot who Catherine loved for years--but he never noticed her, and now she positively loathes him. But her brother’s in danger of going to Newgate, and the despicable Duncan has a plan– she can claim back the money and save her brother. If she marries him…

Excerpt from The Scot Says I Do

Duncan glanced at Peter who had dropped back down on the divan and covered his face with one arm. He was no use to either of them at this point. Besides, this business was between himself…and Catherine. He gently pressed her into the king’s chair, took one next to hers and scooted it around until he faced her. “You and Peter have no home now.”

“Not even the Wilds?”

“Not even the stables.” He tried to be as sympathetic as he could. This was difficult for her. Shattering. And it would only get worse. “For you, things are not so bad. You’re a lovely girl. You can marry well.” He ignored her snort. “But for Peter…” He let it hang there like a razor sharp icicle clinging to a roofline as a melt approached.

“He has other debts.”

“Small ones, but substantial enough for his creditors to ask for retribution.”

They both knew what that meant. Debtors’ prison. A truly nasty end for a feckless lad. But Duncan had the inclination to allow Peter to languish there—at least for a while—to teach the boy a lesson.

“Newgate would kill him,” Catherine whispered.

Her gaze snapped to him. “And how do you know?”

He lifted a brow. He had no intention of telling her that he’d visited and reprieved more than one foolish friend.

“He did bring this on himself. He gambles like a fiend.” A fiend who thinks he can never lose.

Duncan swallowed an outraged laugh. “I believe I already have.”

“Buy out all his debts? Return his wealth and property to him? Pat him on his head and charge him to go forth and risk it all again? What kind of fool do you think I am?”

“A heartless one.” She stood and whirled away, which gave him cause to follow.

But honestly, he was not the heartless one here.

When she spun back, he was right behind her and they were far too close. The tips of her breasts brushed against his chest and he nearly swallowed his tongue. She flinched as well, as though the touch had been like a bolt of lightning. She gazed up into his eyes, hers wide and damp. Her lips parted and her pink tongue dabbed out to wet them and his knees nearly failed him.

Damn she was so beautiful. So glorious. He wanted to kiss her now, ravish her. Claim her. He wanted—

“I cannot bear the thought of marrying one of my suitors,” she said, and he was brought back to the moment, his intent, with a powerful lurch.

“There may be a solution.”

She tipped up her delicate chin bravely. “And what might that be?”

So simple. So perfect.

Her jaw dropped and he fixated on the sight of her open mouth. If that was not a demand for a kiss, he did not know what was.

He pulled her into his arms, reveling in the warmth, the curves of her slight form, and lowered his head.

She tasted like heaven. Sweet bliss. Just like he remembered from that day when he’d pulled her from the loch and forced her to breathe again. Her scent infused him, enamored him, enraged a long-banked fire within him.

She would be his.

He would have her.

Catherine Ross would be his bride, just as he’d dreamed of for so many years. Just as he’d fought and scrabbled and worked for. His life ambition had come to him and the moment was so sublime…
Until she pulled away and stared at him with an odd mixture of shock and fear limning her eyes.

And she hauled back her delicate fist.

And punched him in the jaw.

By the time he’d recovered from the shock of what he could only interpret as her refusal of his suit, she’d whirled away and flounced off to her chambers—God only knew where—in the bowels of the enormous mansion.

But this was only the first salvo in his campaign to win her.

And win her, he would.

Lecia Cornwall is the author of Regency and Scottish romances. Her books are known for their layered plots, humour, and intriguing characters. Lecia lives in Alberta, Canada with two adult children, four cats, a crazy chocolate Lab, the dozens of book characters who live in her head, and one very patient husband who endures it all with remarkable patience. Lecia is currently hard at work on her next book.

Anna Harrington fell in love with historical romances—and all those dashing Regency heroes—while living in London, where she studied literature and theatre. She loves to travel, fly airplanes, and hike, and when she isn’t busy writing her next novel, she can usually be found in her garden, fussing over her roses. Anna is the author of The Secret Life of Scoundrels series, including Along Came a Rogue.

Authors Nikoo and Jim McGoldrick (writing as May McGoldrick) weave emotionally satisfying tales of love and danger. Publishing under the names of May McGoldrick and Jan Coffey, these authors have written more than thirty novels and works of nonfiction for Penguin Random House, Mira, HarperCollins, Entangled, and Heinemann. Nikoo, an engineer, also conducts frequent workshops on writing and publishing and serves as a Resident Author. Jim holds a Ph.D. in Medieval and Renaissance literature and teaches English in northwestern Connecticut. They are the authors of Much ado about Highlanders, Taming the Highlander, and Tempest in the Highlands with SMP Swerve.

Sabrina York is the New York Times and USA Today Bestselling author of more than twenty hot, humorous written works, including Hannah and the Highlander. Her stories range from sweet and sexy to scorching romance.

Visit Sabrina York's website and enter to win one of her coveted tiaras!