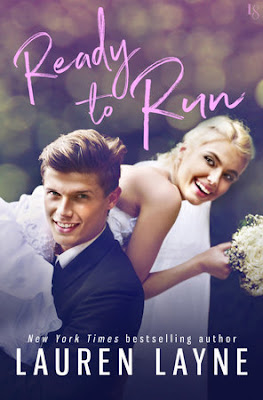 Damn. Charlie hadn’t been lying about the hot blonde.

The woman walking straight toward him was all tight jeans, high heels, and confi-dence. And hot. Very, very hot.

Charlie muttered something admiring under his breath, and Luke’s gaze flicked to the man beside the woman. Tried to place him. Couldn’t.

Not too many guys around here who wore light-purple shirts and white pants with the same easy comfort that Lucky Hollow residents wore jeans and flannel.

No doubt about it—neither was from around here. Not by a long shot.

The man was a half step behind the woman, and Luke assessed that the woman was calling the shots.

His eyes narrowed as he realized that she hadn’t once wavered in her approach.

She knew what she was after:

She got closer and Luke saw that the face matched the body. Wide blue eyes, full lips, sassy shoulder-length blond hair that was just tousled enough to make a man wonder how it had gotten that way—to want to be the one to muss it.

Her gaze flicked over him, and Charlie whistled and muttered under his breath. “She just checked you out, man.”

She had indeed, but Luke was far from flattered. It hadn’t been the assessment of a woman checking out a man so much as a predator evaluating its prey.

As though she was evaluating him for . . . something.

Blondie stopped in front of him, and the second her blue eyes locked on his, Luke felt a little jolt of awareness and was irrationally annoyed. It had been a long time since he’d been quite so aware of a woman.

Once, he’d enjoyed the feeling—sexual chemistry was almost the perfect combination of pain and pleasure. A subtle punch in the gut that you wanted to experience again and again.

These days, though, he was having a hard time getting past the pain part. The shitty parts had outweighed the good parts just one time too many. Now he mostly settled for casual hookups with a divorcée a few towns over who was even less interested in com-mitment than Luke was.

He had zero use for attraction to a pretty, bold woman in high heels.

Luke noticed that for a sheer moment she had a slightly off-balance look, as though she too had felt the annoying zip of arousal when their eyes met, but she recovered quick-ly.

Pasting a sunny, generic smile on her face, she stuck out her right hand. “Luke Elliott. I’m Jordan Carpenter. This is my colleague, Simon Nash.”

Good manners had him setting down his equipment and extending his own right hand toward hers even as his brain caught on her name. Familiar, and . . .

He managed to stop from jerking his hand back, but just barely. Instead, he gritted his teeth, gave her hand a perfunctory shake, and then fixed her with a glare. “You’re wasting your time, Ms. Carpenter. And mine.”

Blue eyes narrowed. “Aha. So you did get my emails.”

Those. The voicemails. The letters.

“Sure,” he said with a nod, shoving his hands in his pockets. “Just like I suspect you got the message that I didn’t want to be a part of your show.”

Charlie looked from the woman to Luke and back again. “Show?”

Ryan ambled over, his shit-eating grin telling Luke that this damn woman had already spilled the beans on why she was here. “Luke’s gonna be a national heartthrob.”

“International,” said the blond guy in the purple shirt.

Jordan Carpenter didn’t look at her companion, but all three firefighters did.

The other man gave the sort of easy smile that probably had him making friends easily. Luke didn’t want a new friend.

Especially not one who wanted to use his shitty romantic past for the sake of TV ratings.