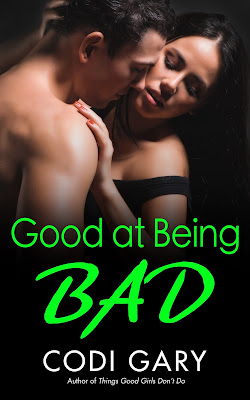 Packing up his struggling computer business to start over somewhere besides small town Rock Canyon is the best plan he’s got—until a beautiful stranger in need of a tech miracle stops him in his tracks. A nice guy won’t get this girl, but to transform into a brooding bad boy, he’s going to need an expert’s help.

And there’s no one badder in town than Ellie Willis.

Ellie has spent two years trying to clean up a reputation that won’t ever recover from her damaging past. Branded by her mistakes, she’s desperate for an extreme makeover. When Mike asks her for lessons in running wild, she has a deal of her own in mind. She’ll help him dirty up his rep if he’ll help clean up hers.

But as the two embark on quid pro quo relationship, Ellie can’t deny the attraction neither of them saw coming. Never has it felt more wrong to do the right thing. Can she show Mike that it’s better to find someone who accepts who you really are? Or will she always just be good at being bad?

Eleanor Willis might be turning over a new leaf, but that didn’t mean she’d retired her bitchy side.

As she walked down Oak Avenue, she silently rehearsed the phone call she was going to make as soon as she got home. She’d taken her stupid failing laptop to Twin Falls for repair two weeks ago. The guy’d had plenty of time to work on it and when she picked it up yesterday, he’d had told her he’d fixed the problem.

Fixed was complete bullshit. The screen fell completely blank the moment she powered it up and now she had a few choice words for him. So much for taking a recommendation that started with “he’s a good guy.” Those words never worked out for her. Nice or good guy were code words for “appearances can be deceiving.”

Half the guys in Rock Canyon were perpetrated to be good guys and they’d all turned out to be dick holes. Every. Last. One. Didn’t leave her with a lot of faith in men in general.

Ellie turned the corner, heading down to Bits and Pieces Computer Repair. The owner, Mike Stevens, was another good guy, but at least she knew from experience that he could fix a motherboard. The guy didn’t like her and the feeling was completely mutual. He thought she was a troublemaking drama queen. A dumb kid.

At least, that’s what he’d called her the one-time she’d come on to him.

Almost two years ago, back when she was still drinking heavily and partying hard, she’d been at Buck’s, drunk out of her skull, and spotted Mike sitting at the bar alone. He’d looked damn good through the whisky haze, so she’d sidled up to him and asked him if he’d wanted to buy her a drink.

She hadn’t expected him to curtly ask if she was old enough to be there.

So she’d said the only logical retort that had come to her blitzed mind: “Can’t you tell a grown ass woman when you see one?”

“All I see is a dumb kid trying to get into trouble. Go home.”

She’d left, all right, but she hadn’t driven. She’d learned that lesson far too well, and set her sights on an easy lay. She’d gone home with Rip Colotta and took her frustrations out on him in the best way possible.

Mike’s words had stuck in her craw, though, especially after everything she’d put her sister, Caroline, and Caroline’s boyfriend, Gabe Moriarty, through. She’d hit another car when she’d driven home drunk from a party. She was under age and scared, and she’d taken off. When she confessed everything to a guy she’d grown up with, he’d blackmailed her into collecting shady secrets about her dad. She’d gone along with it at first, but as he became more violent and demanding, she’d shut him down.

Then he’d beaten her bloody and only stopped because she’d agreed she would name Gabe as her attacker.

Ellie had done it to keep her secret, but watching Caroline’s pain had been unbearable. She’d come forward, complied with court-ordered house arrest and community service, and had been trying like hell to clean up her act since. She’d almost lost her sister and put an innocent man in jail, albeit temporarily. Still, the four days Gabe had sat in the cell ate at her, especially since he had a record, must have been awful for him and nothing she did or said would ever fully make up for that. She could make amends for a thousand years and still it would not be enough.

Even though she worked nights at Buck’s Shot Bar and had alcohol literally at her fingertips, she abstained. Most of the friends she’d grown up with had drifted away from her because she wasn’t fun anymore. She’d started throwing herself into helping the town of Rock Canyon. She’d been cleanup crew at every function over the last year, and volunteered at the domestic violence shelter on Pine Ave.

But the people who held on to all the terrible things she’d done—announced for all the town to see in the local gossip column, Small Town Scandals—didn’t seem to want her helping hand.

Another thing she’d given up? Sex. It had been over a year since she’d gotten any, and she did miss it. She wanted more than sex, though. She wanted what her older sisters had; men who loved them despite the reputations they couldn’t shake. Once upon a time, the Willis sisters weren’t the type of girls mothers wanted their sons to bring home.

Now, Val was a respectable farmer’s wife and Caroline…

Well, Caroline didn’t care what anyone thought of her.

Unlike Ellie, who always seemed to be searching for approval. Which is why asking for help from someone who obviously thought very little of her was rough, but today she was just going to have to suck it up. She needed her computer fixed and he was the man to do it.

As she pulled open the door and stepped inside the repair shop, she saw him at the back of the store, hunched over his work desk. He was wearing thick-framed Buddy Holly glasses, and she silenced the rogue thought that appreciated how adorable he looked in them. When he glanced up at her as she approached, the glasses magnified his warm brown eyes. His full lips turned down at the corners. Obviously, he was as happy to see her as she was to be here.

“Can I help you?” His voice was deep and pleasant. He straightened up, and her eyes rolled over his broad shoulders and tapered waist, thinking that if he looked this good with his shirt on…

Sure, she knew he was not her type personality-wise, but that didn’t mean she couldn’t admire how well put together his outsides were. True, he wasn’t as tall as she preferred her objects of lust to usually be, but when she’d first seen him, she’d thought maybe he would be worth a roll in the sack.

Of course, that was before he’d opened his mouth.

Stop eye-banging him and remember he is a jerk. This is a necessary evil, nothing more.

“Yeah. My computer’s on the fritz and I need you to take a look at it.”

He let out a heavy sigh that grated on her nerves.

“Look, if you don’t want my business, I can take it elsewhere,” she said.

“Would you relax? I just remembered I forgot to make copies of our diagnostic forms.” He pulled open the first drawer of the metal filing cabinet and looked at her with a smile. “I find making copies tedious and hate doing them, so I procrastinate. Thus, the sigh.”

“I hate procrastinating. I think it’s lazy.” Okay, so that wasn’t true. She was the queen of procrastination, but she wanted to nettle him.

He glared at her briefly before he went back to looking for the form. “Found them. And I have three left, so I can be lazy for one more day.”

The sarcasm oozed across his words as he slammed the drawer and held out a form. “Leave the laptop and cord over there on the work table with this sticker on it” —he scribbled her name down on a sticky note— “and fill out this form and bring it back to me. Got it?”

She took the form and sticker with a jerk. “Um, yeah. Anyone ever mentioned that your customer service sucks?”

“Your people skills aren’t exactly stellar, so I wouldn’t be casting any stones, honey.”

Ellie’s temper flared and she tried counting down in her head as Mike turned his back on her. Man, it would be so easy to grab something off one of the shelves or the side table and hurl it at his stupid back. He was a poo-faced douche monger.

Gee, are you having a brain fart today or what? That’s the best you can do? Me thinks we need more coffee.

Codi Gary loves writing books that pull at her reader’s heartstrings and tickle their funny bones. She is a member of RWA’s Honor Roll, and can’t imagine writing anything that doesn’t have a happily ever after. When she isn’t writing, or procrastinating on Facebook, she can be found snuggling with her furry or human babies, reading something fantastic, or watching addicting TV shows and movies. She will always be a rom-com enthusiast and die hard supporter of her local animal shelter. She lives in Idaho with her husband, adorable children, and mischievous pets. To keep up with Codi, check out her website and follow her newsletter at http://www.codigarysbooks.com.