Spotlight: The Scandal of It All (The Rogue Files #2) by Sophie Jordan 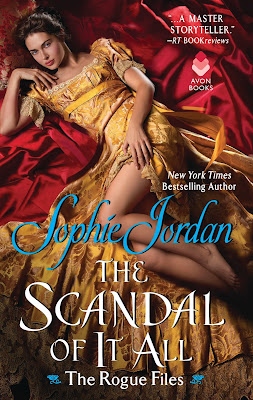 It takes two to make a scandal…

What kind of woman ventures into London’s most notorious pleasure club? An outsider like Graciela, the Duchess of Autenberry, snubbed time and time again by society because of her Spanish roots. Ela longs to take a lover for a single, wild night, and within the walls of Sodom there are gentlemen to suit every forbidden taste. If only she were not so drawn to the smoldering Lord Strickland…a dangerous man who sees beyond her mask, and could ruin her reputation with a mere whisper.


Lord Strickland never permitted himself to fantasize about the sultry, off-limits lady, but then he never expected to find Ela in a place so wicked, looking for what he’s more than too happy to give. She may not be to the ton’s taste, but she suits him perfectly. First, however, he must convince her to trust in this dangerous desire—and in the promise of forever unleashed by one wild, scandalous night.

“This is no place for you.”

She bristled. She imagined he would not say the same thing to a man her age. Was she so very old and matronly that he did not think she had any right to be here?

Undoubtedly he consigned her to a certain category in his mind. A certain sexless category tantamount to nuns and grandmothers.

“I’ve every right to be here—”

“Oh, do you? Well, if you feel so very entitled to be here, then by all means, step out into that corridor and greet your stepson.”

He moved away from the door, grasped the latch and started to pull it open.

She squeaked and threw herself against him, flattening him into the door and shutting it again with a swift thud.

“No! Don’t do that.” Her breath escaped in hard pants that got lost somewhere in the vicinity of his chest. That’s how tall he was. Her nose was directly level with his throat. Even in the shadows she could detect the thrumming pulse at his throat. Taller than average herself, she had always appreciated a tall man.

Her gaze flicked up to his eyes. He watched her, holding himself utterly still. Against her. Bodies flush. Hearts beating in cadence.

It was unnerving to say the least . . . and yet for the life of her she couldn’t step back and peel herself off him. She couldn’t stop staring into those pale gray-blue eyes that looked at her with angry emotion—another first. He’d always been so polite and proper with her. A perfectly circumspect gentleman.

His fierce expression and intense eyes mesmerized her. She moistened her lips and his gaze followed the movement. The blue of his eyes seemed to darken a shade—or maybe it was simply the dim lighting of the room? His stare dropped even lower.

A quick glance down reminded her of the indecent cut of her gown. Pressed against him like this, the tops of her breasts swelled above the neckline. She felt the heat of her blush start in her face and then watched as red crept downward over her dusky mounds.

Involuntarily, her nipples pebbled inside her corset.

She gasped. Even though he couldn’t know and he couldn’t possibly feel her body’s betrayal
(with him of all men!), she lurched back.

Now, with a few feet of space between them, their gazes locked for an interminable moment. Her heart beat harder and faster in her too-tight chest. A chest that only seconds ago pressed intimately against him. Her nipples still throbbed, as though she still felt the pressure of his body against her.

At the thought of his body, she raked him with a quick glance, imagining that hard body of his . . . the pressure of it covering her—She reined in her scandalous imagination with a firm yank.

The heat scoring her cheeks burned hotter. She inhaled. It was simply being here, in this house of iniquity, that made her think such wholly unacceptable thoughts. About Lord Strickland, of all people. He was her stepson’s best friend—a longtime family friend. Even if he weren’t too young for her (and he was!), he was absolutely inappropriate as a candidate for dalliances.

It was not only unseemly . . . It was perverse of her to even entertain such notions. He would likely be horrified if he knew.

Sophie Jordan grew up in the Texas hill country where she wove fantasies of dragons, warriors, and princesses. A former high school English teacher, she’s the New York Times, USA Today and international bestselling author of more than twenty novels. She now lives in Houston with her family. When she’s not writing, she spends her time overloading on caffeine (lattes preferred), talking plotlines with anyone who will listen (including her kids), and cramming her DVR with anything that has a happily ever after. You can visit her website for more information.