Review: The Art of Running in Heels (Chinooks #7) by Rachel Gibson 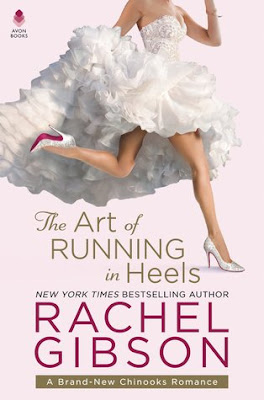 "You are full of surprises, Lexi Kowalsky. You're different from the woman who dove onto the Sea Hopper." - Sean Knox

Running in five-inch stilettos is an art form.

Leaving your fiancé at the altar on live television is a disaster. Lexie Kowalsky thought she was ready to get married in front of millions of people, but at the last minute she fled the set of television’s hottest reality show, Gettin’ Hitched. Wearing a poofy white dress and a pair of five-inch sparkly shoes, Lexie hopped a float plane for Sandspit, Canada. She figured no one would find her there. But she was wrong.

Sharing her flight was the Seattle Chinooks biggest star, Sean Knox. Lexie wasn’t just a reality-show runaway, she was his pain in the butt coach’s daughter. She was chaos and temptation and definitely off limits, but getting her luscious body out of that wedding gown, he couldn’t resist getting her in his bed for one amazing night.

Then a photo of Sean and Lexi breaks the internet—and suddenly they’re both swept up in a crazy plan to spin the whole story. But you can’t run from love—

Oh, my gosh. Rachel Gibson... The author that introduced me to the world of contemporary romance... The author that introduced me to the sexy world of sports romance... The author that dissed my team, not once, but twice... I have been a huge fan of Rachel's since I first picked up one of her books many, many moons ago. It's been so long that I don't even remember which book it was. It was either Simply Irresistible or It Must Be Love, but I know for sure it was one of her earliest books. I've been hooked ever since. When Avon and Rachel announced the return of her Chinooks, I went ballistic. I squealed so loud, my neighbor's dogs heard me from 3 doors down. To say I was excited for this book in a vast understatement. I counted down the days...

Fast forward to last week when I was nailed by reading fatigue. It wasn't a slump because I wanted to read. It was a case of falling asleep within 25 minutes after I picked up the book. So it took me far longer than it should have to finish The Art of Running in Heels. That's okay, though. Instead of zooming through it, I was able to savor it and enjoy reuniting with characters from years past.

Sean Knox was quite the character. As the newest Chinook, he's got a lot to prove to his new coach. Unfortunately for him, running off with the coach's daughter will not win him many brownie points. However, he does have a little fun spending time with the woman when she clearly has no idea who he is. While hiding out in Sandspit, things start to heat up and Sean quickly realizes that his life will never be the same.

Lexie Kowalsky is exactly like her mother. From her head down to the heels she's wearing as she sprints away on her wedding day. Yep, they also have that in common. Like mother, like daughter. Lexie is quite the conundrum. In some ways she's impulsive, but yet she's also determined and headstrong. She's trying to build her dog accessory empire and will do anything to make it succeed. While she's a lot like her mom, she also shares a lot of the same qualities as her dad. Most noticeably her competitiveness. Which tends to get her into trouble...

When Sean and Lexi come together, my heart soared. I loved these characters so much because they reminded me of why I originally fell in love with the genre. They're quirky, independent, lovable... Granted there were moments when Sean was a bit of an ass, his progression in the book allows him to redeem himself.

While I was reading The Art of Running in Heels, there were times when the words felt a bit disjointed. It felt as if there were a few sentences missing here and there. There were a few points in the book when I had to re-read a page or two to get the transition. It didn't feel rushed, it just felt like it jumped and I wasn't expecting it to.

Honestly... Why is it always my Ducks that get dissed on in these books? First it happened in Simply Irresistible and now Lexie's creative jab? What the heck?

Overall, I flipping loved The Art of Running in Heels. It had everything that I adore in Rachel's work. Fantastic characters, witty banter, and just enough sex appeal to keep it going. I hope that this marks the return of the Chinooks and that a certain relative of a certain goalie is next. Until then, I just might have to go back and do a re-read (or a re-re-re-read some cases) of the series.

Posted by CrystalBee at 3:41 PM