Review: If Ever I Should Love You (Spinster Heiresses #1) by Cathy Maxwell 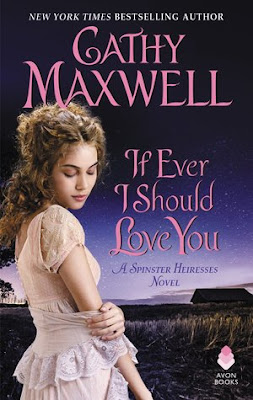 Once upon a time there were three young ladies, who, despite their fortunes, had been on the marriage mart a bit too long. They were known as “the Spinster Heiresses” . . .

He’s inherited a title, but not a penny to speak of, so the Earl of Rochdale knows he must find a wife—preferably one tolerably pretty and good-tempered, but definitely wealthy, and who will exchange her fortune for his family name.

His choice: Leonie Charnock, one of the season’s “Spinster Heiresses.” Years before, the earl had saved the dark-eyed beauty’s reputation and she is still breathtakingly lovely, leading Rochdale to hope that their marriage will be more than in name only.

However, Leonie doesn’t want to be anyone’s wife. Nearly destroyed by the secrets in her past, Leonie agrees to their union with one condition: there will be a wedding but no bedding. But it’s a condition the new Countess Rochdale isn’t sure even she can keep.

For someone who doesn't read a lot of historical romance, I am killing it this year! Okay, so I've only read 2 and a half books so far, but it's only March and that's already more than I read in all of last year. Although I have to say, as much as I'm enjoying the historical romances I've read this year, it takes me forever and a day to finish one. Take Cathy Maxwell's If Ever I Should Love You for example. I actually had to take a bit of a contemporary romance intermission when I was just over the half way mark because it was taking me so long to read it. The breather worked wonders, though. I devoured the last half of the book in record time. Another bonus about reading more historical romances... This was my first Cathy Maxwell book. And I have to say, I quite enjoyed it.

I wasn't prepared for the emotional roller-coaster that was If Ever I Should Love You. I guess if you really pay attention to the title, that should have been the first clue, but I went into the book as a new Cathy Maxwell reader. The characters were so haunting, especially Leonie. My heart went out to her from the moment I met her. The things Leonie went through as a young woman could break anyone. She's never had a support system. She doesn't know what it's like to love or be loved. This is all foreign to her and, of course, she stumbles. She felt so real and I adored her. On the other hand, it took me awhile to warm up to Roman. He's pretty brash at the beginning of the book and that turned me off for the first couple of chapters. When he starts to warm up and reveal his real feelings, that's when I started to like him. As much as Roman wants to fix Leonie, he knows he can't. It's up to Leonie and all he can do is be supportive. Cathy didn't rush them and gave them the space they needed to learn to love. I loved Cathy's writing style. The background characters were so damn lovable. Amazingly done. I don't say this often with historical romances, but I am looking forward to the second book, which I should be starting soon. Yay!

Cathy Maxwell spends hours in front of her computer pondering the question, “Why do people fall in love?” It remains for her the great mystery of life and the secret to happiness. She lives in beautiful Virginia with her children, horses, dogs, and cats.