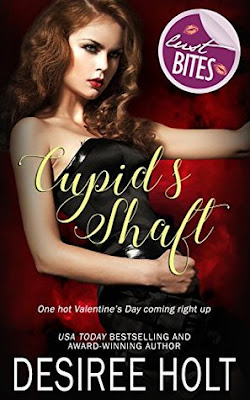 "Jessie, if I'd ordered a Valentine's Day present, I couldn't have gotten one better than you." - Riley Malone

When Jessie Rawlins’ boyfriend dumps her just before Valentine’s Day, she ends up by herself at her isolated cabin in Maine with all the trappings for the holiday—including a bag of kinky toys—and no one to celebrate with. Then a snow storm dumps gorgeous Riley Malone on her front porch. Running from a broken relationship as well as a business partnership gone bad, Riley thought his good luck had run out. Until fate—and Cupid—strands him at Jessie’s cabin.

What woman hasn’t fantasized about having a sexy, handsome stranger come out of nowhere and rock her world? When Riley shows up on her doorstep, frozen half to death, Jessie knows exactly how to warm him up. But will Riley want to play along with the games she’d planned for her Valentine’s celebration? A night of hot, sizzling, erotic sex answers that question. But what will happen when the day for lovers is over, the storm is gone and it’s time for him to be on his way? Will he take a piece of Jessie’s heart with him, or will Cupid’s arrow strike them both?

Reader Advisory: This book was previously released elsewhere. It has been revised and reedited for release with Totally Bound Publishing.

There are times when a girl needs a small dose of kink in her reading schedule. After finished Shelly Bell's newest book, I was still craving some kink but didn't have a whole lot of spare reading time. I knew which novella I wanted to read and so I dived right in.

Jessie Rawlins didn’t know what depressed her the most—the unexpected snowstorm that raged outside her little cabin, the calendar that reminded her another Valentine’s Day would be here tomorrow and she still hadn’t found a man to send her heart and senses into orbit, or the fact that she was turning into a sex-starved maniac. Snow had not been predicted when she’d decided to escape the holiday festivities and all the couples sucking face everywhere. But here she was, snowbound. How trite. Even her cell wasn’t working.

She looked around the cabin. Her hideaway. Her present to herself when she’d received a huge commission on a house sale. Real estate was hard damn work and she’d more than earned the bucks. It was just one big room, with a four-poster bed on one wall, a conversation grouping around the stone fireplace where a fire now blazed, a tiny kitchen and a small bathroom. But it was all hers and a great place to get away from things.

She kicked at the gym bag on the floor by the couch, swearing at her luck and raining curses down on every woman who’d be locked in sexual bliss on February fourteenth. Everyone but her.

Not that she wasn’t willing. She just couldn’t seem to find a man as adventurous in sex as she was. Strike that. As she wanted to be. She’d given up looking for love. She’d just be happy to find a man who could ring her chimes. But every man she’d met in the past three years had turned out to be a dud in one way or another. Or else they were always dumping her for leggy blondes with size two figures. She’d never even gotten to the point of hauling out her toys yet. Except for herself.

What’s wrong with me, anyway? Every man she’d started a relationship with sooner or later left her behind and, the next thing she knew, they had some bimbo on their arm. Her mother had always told her good things came in small packages, but it seemed no one else believed it.

A multi-published, award winning, Amazon and USA Today best-selling author, Desiree Holt has produced more than 200 titles and won many awards. She has received an EPIC E-Book Award, the Holt Medallion and many others including Author After Dark’s Author of the Year. She has been featured on CBS Sunday Morning and in The Village Voice, The Daily Beast, USA Today, The Wall Street Journal, The London Daily Mail. She lives in Florida with her cats who insist they help her write her books, and is addicted to football.