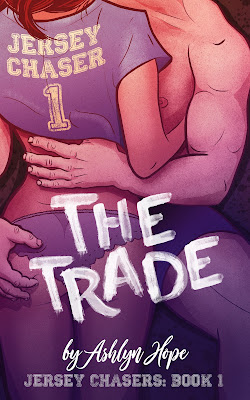 "Are you stalking me?" - Kevin Dane

Her name is Tyra, and she’s a footballsexual.

The muscles, the chiseled faces, the masculine posturing, and the tight pants all make her heart pound, and since her high school days stealing kisses from the varsity running back, she's a bad girl that's been hooked on the guys of the gridiron. She’s addicted to these dudes, and she’s not the only one. She’s one of a group of local girls who go out together and try to score with these guys every chance they get.

So, yes, Tyra’s a jersey chaser. But when she meets the hunky big name quarterback who was traded to the team, she’s met her match. He’s handsome, smart, and sweet, and he and Tyra have a lot in common – including a growing desire to settle down.


As their relationship heats up, Tyra will consider swapping out her football groupie ways for a real relationship. But that’s not going to happen if her past doesn’t block her happily ever after from happening.

So... I went on a bit of a sports romance binge. What started with two hockey romances morphed into a football romance and ended with an ex-rugby player. More on that one later...

We all know I love a good sports romance. Bad boy athletes meeting their match and falling for  women (or men) that either have no clue who they are or could care less. One element that I haven't come across before is a jersey chaser (or puck bunny if you're a hockey fan) falling for the athlete. Jersey chasers are usually what athlete heroes stay far away from when they find their heroine. Tyra, the heroine in The Trade, is a proud jersey chaser. She's comfortable with her sexuality and she rocks it. That is what initially grabbed my attention. It's something different from what I've read before.

As for Tyra, she has an epiphany after running into an old classmate. She finds that she's tired of the game and is ready to settle down. She tells herself this, but when she finds out that her favorite football player was traded to her favorite team, she decides to have one last fling. Let's be honest here, Tyra stalks the guy. Not that he minds... ;) One thing leads to another... And, well... You know how that goes.

Overall, I really enjoyed reading The Trade. There were two elements of the book that left me a bit unsettled. The first was some of Tyra's actions. I liked her as a heroine. Her transformation was great. I love that she grows up a lot throughout the book. However, I didn't like how she used one of her dates. The athletes she hooks up with know the deal. It's just a couple hours of sex. When she brings in a regular guy who doesn't know the score, it left a bit of a sour taste. The second element was that The Trade is entirely in Tyra's perspective. There were moments when I desperately wanted Kevin's perspective. What was he thinking during certain scenes? Why didn't he call her when Tyra was so certain he would? Things like that. However, it being told in Tyra's perspective does give readers ample time to watch her grow as a character and decide if they like her or not.

The Trade was a fun, sexy read with an unconventional heroine. It was fun reading something a bit different from the sports romances I usually read.

Ashlyn Hope is a recent college graduate and former military brat living in New England with her boyfriend Bryce and their Blue Heeler, Chance. She regularly roots for the Washington Redskins and the Texas Rangers, but the Patriots and Red Sox are starting to grow on her. When not cheering on her teams, Ashlyn enjoys cooking, volunteering with a children’s charitable organization, and playing softball. She has a lifelong passion for writing, but is new to being a published author.