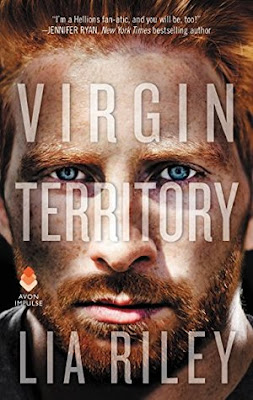 Patrick “Patch” Donnelly has what it takes to be the best goalie in the NHL…if only he could learn to control his temper. When Coach orders him to get his head in the game with private yoga classes, Patch isn’t having it. There’s no way this tough Boston guy would be caught dead downward dog-ing his way to inner peace. But if he refuses, he risks his starting position and the dream he sacrificed everything for, including joining the priesthood.

Yoga instructor Margot Kowalski is over men. After yet another toxic relationship, she’s eager to forget love and focus on growing her business. Doing the Hellions head coach a favor by helping out a troubled player can't hurt, and it might give her career a high-profile boost. But free-spirited Margot is soon charming the pants off Patch. Literally. Her sassy combination of sweet and sexy proves irresistible to the goalie. Before Patch can give into temptation though, he’ll have to confess his biggest secret:

But Patch is hiding more than sexual inexperience, and his dark past soon threatens to destroy his shot at true love.

I very rarely binge books. After finishing a book, I usually need something different to mix it up a bit. Yeah, that totally went out the window one night because right after I finished Head Coach, I knew I had to jump right into Virgin Territory. So I did and I regret nothing!

Virgin Territory was amazing. Margot likes to give her friends so much shit in their books and I could not wait to watch that girl fall for Patch. I loved Margot. She's hilariously sarcastic with a sweet side that she shares with those she loves. Patch was adorable. I loved how eager he was to learn how to please women. Yeah, buddy! He's the misunderstood bad boy. Yes, he's impulsive and acts before he thinks, but there is a reason behind his actions. And when it finally lets his wall downs, he's able to work through the pent-up anger.

Virgin Territory had a sweetness to it that I wasn't expecting. It still has the sexiness that made me fall in love with the Hellions series. The sweet moments between Margot and Patch were a fabulous new layer to their romance. It was a fantastic addition to a series that I already loved.

Lia Riley is a contemporary romance author. USA Today describes her as "refreshing" and RT Book Reviews calls her books "sizzling and heartfelt." She loves her husband, three kids, wandering redwood forests and a perfect pour over coffee. She is 25% sarcastic, 54% optimistic, and 122% bad at math (good thing she writes happy endings for a living). She and her family live mostly in Northern California.