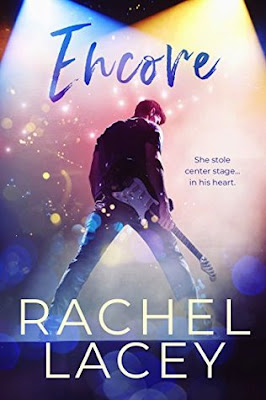 "I'm romantic. If you're in my bed, I'll worship your body until you're screaming my name. I'll make you feel beautiful and treasured and just a little bit scandalous." - Cole Nix

SHE STOLE CENTER STAGE…IN HIS HEART

Rocker Colton Nix would do just about anything to rid himself of the unflattering nickname his womanizing ways have earned him in the tabloids—anything except settle down with a woman, of course. If his parents taught him anything, it’s that love is as fleeting as celebrity. But after a few too many drinks on a private island in the Caribbean, Cole wakes up with the king of all hangovers…and a wedding band on his left ring finger.

Celebrity assistant Jenn MacDonald has her future meticulously planned, and she’s ready to make her next move: becoming a songwriter. Drunk-marrying a rock star was definitely not on the list. When Cole suggests they stay married for six months so that he can ride out the good publicity while helping her launch her new career, she can’t help but say yes. She’s even able to convince herself—almost—that her decision has nothing to do with the way one glance from Cole sets her body humming like the strings on his favorite guitar.

They were near strangers when they exchanged drunken vows on the beach, but the connection—and the attraction—between them is powerful and real. Soon, they’re making beautiful music together, both in and out of bed. They’re giving the performance of their lives, until it all comes crashing down around them. But every great performance deserves an encore, and theirs might just be love.

Oh, my god. I loved Encore! There's a little bit of everything in this book. It's an accidental marriage that turns into a marriage of convenience wrapped up in a rock star romance surrounded by sizzling sexual chemistry. Phew, that was quite the mouthful.

Encore was the perfect sequel to Unwritten, the first book in Rachel's Rock Star Duet. It wasn't quiet as emotionally charged as the first book, but it still had all of the elements that I've come to love in the author's works - characters that I fall in love with, a writing style that is smooth, and enough chemistry to snag my attention. I loved Jenn's loyalty and friendship with Kate in the first book, so I was over the moon excited to read her book. Cole had me from the moment he appears in the first chapter. He's the rock star that is jaded when it comes to love. Not having the best examples of love and marriage, Cole is in over his head when it comes to his sudden marriage to Jenn. All he knows is that his attraction to her is undeniable and keeping his hands off her is going to be pure torture. When they succumb to the sexual tension, their story ignites and all bets are off.

I'm sad that the Rock Star Duet is only a 2 book series. I would have loved to see how Rachel expanded on the world. I enjoyed the time I spent reading Unwritten and Encore. They're different from some of Rachel's other books and I loved both of them. Rachel definitely likes to keep her readers on their toes. I never quite know what I expect next. And you know what? I friggin' love that.