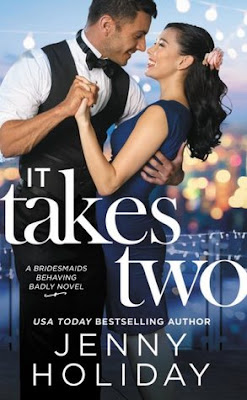 "Noah Denning, are you propositioning me?" - Wendy Liu

All’s fair in love and war

Wendy Liu should be delighted to be her best friend’s maid of honor. But after years spent avoiding the bride’s brother – aka the boy who once broke her heart – she’s now trapped with him during an endless amount of wedding festivities. Luckily she’s had time to perfect her poker face, and engaging Noah Denning in a little friendly competition might just prove that she’s over him for good…

Noah Denning is determined to make his little sister’s wedding memorable. But it seems Wendy is trying to outdo him at every turn. Challenging each other was always something he and Wendy did right, so when she proposes they compete to see who can throw the best bachelor or bachelorette party in Sin City, Noah takes the bait – and ups the stakes. Because this time around, he wants Wendy for keeps. And when you’re fighting for love, all bets are off.

Let me set the scene for you... Last week, Forever Romance teamed up with Jenny Holiday to host a week long read-a-long for One and Only, the first book in Holiday's Bridesmaids Behaving Badly series. So here I was about to do a quick re-read One and Only when I decide to pick up and read a couple pages of  It Takes Two. That title is no joke! It took me two pages before realizing that the chances of me putting it down was zero to none. I was done... Gone for... Crystal was out for the count until she finished the book. So, I did... At 3 o'clock Monday morning. I regret nothing, excerpt for the coffee IV I needed to function on Monday.

I loved this book. It Takes Two was a magical experience from cover to cover. Noah Denning is my new book boyfriend. Watching him slowly lose his mind as his attraction to Wendy grew was amazing. I think he knew deep down that the attraction has always been there, but since Wendy was his little sister's best friend, of course he buried it. When he runs into her years later, he can't ignore it. Even more, Noah doesn't want to ignore it. He may not be in the right mind-frame for a relationship, but damn if he's going to let this moment pass them by. I loved his "Cher moment" when he realizes that he loves Wendy. If you've seen Clueless, then you'll know what I'm talking about.

I loved Wendy just as much as Noah. In fact, I've added her to my book BFF list (heroines I want to be best friends with). Poor thing has been through so much that started with the sudden death of her dad. All her life she's only known what it's like to lose someone. Eighteen year old Noah standing her up for his prom was the last straw. From that point, Wendy knew it was better to shield her heart than having it broken. As Jane's wedding approaches, Wendy starts to panic a little at the thought of possibly losing her best friend. As her relationship with Noah blossoms, Wendy's heart starts to heal. And she realizes that things are going to be okay.

I don't know how many times I can say I loved It Takes Two before I start to sound repetitive. But... I loved it so damn much! I adore the friendship between Wendy, Jane, Elise, and Gia. Gia's reaction to Noah and Wendy was friggin' hysterical. I loved the relationship between Wendy and Noah. It was sweet, romance, and sexy... Then there's Jenny's writing, which is fabulous. Just a flipping amazing book. I've got my fingers crossed that Gia's book will include her wedding because I need it. After 2 books, Jenny Holiday is firmly planted on my favorite author list.

Posted by CrystalBee at 9:41 PM