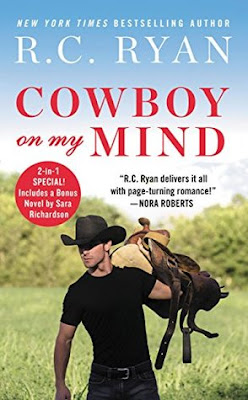 A heartwarming western romance about a cowboy who gets a second chance with his first love in the rugged beauty of the Montana mountains. . .

Ben Monroe was the ultimate bad boy – and everyone in Haller Creek knew it. But now as a sheriff’s deputy, Ben spends his time breaking up bar fights rather than starting them, and staying away from trouble…until Becca Henderson comes back into town. She’s just as beautiful as Ben remembers – and just as far out of his reach.

Coming home is exactly what Becca Henderson needed. A place of her own, a successful new business, and a chance to reconnect with the sexy cowboy she had a crush on in school. Ben has always blazed his own path and never let anyone stand in his way. It excites-and scares-her. But when an unexpected threat surfaces, Becca will see just how far Ben will go to protect the woman he loves-and fight for their chance at forever.

Every reporter in the country wants an exclusive interview with chiseled Olympic heartthrob Jaden Alexander – nicknamed the “Snowboarding Cowboy.” But only one of them has the easygoing charm – and breathtaking beauty – to knock Jaden off balance . . .

If your best friends had to pick four words to describe you, what would they pick?

What are you passionate about?

The underdog. Anyone being bullied or threatened. And Mackenzie Monroe. He’s the man who took a chance on three young desperate orphans and pledged to do whatever necessary to keep us from going back into the foster system. He gave us a loving home and a chance to turn our lives around. Mac is my hero. I can never repay him for what he did for us.

Supper with the men who have become our family.  Occasionally a longneck at the Hitching Post, the bar near our ranch. And recently, night patrol for Sheriff Virgil Kerr, who asked me to give him a hand while his leg injury heals.

What are the three things you enjoy doing in your free time?

I like spending time up in the hills with the wranglers and the herds of cattle. And I've got this special place - a plot of land I chose when my adopted father offered my brothers and I the chance to choose whatever piece of the ranch we wanted for our very own. You can't imagine what that means to a guy who never had a place to call his own. I chose a spot up in the hills far from civilization, with only the wild creatures for company. This is my thinking spot.  My dreaming spot. My healing place. My very own slice of heaven.

What's the last song you listened to?

I love country music. I'd say Patsy Cline. When she sings about being crazy over a lost love, her voice just breaks my heart. And I'd know a thing or two about that.

Our county social worker and traveling nurse and teacher, Mary Pat Healy, saw to it that my brothers and I read the classics and got a proper education. I guess my favorite has always been To Kill A Mockingbird, because I look around my family and see the good men some folks would think of as misfits or outcasts. Knowing them, I dare anybody to judge them by the faces they show the world. I've experienced first-hand the goodness in their hearts.

If you could go back in time and change one thing in your life, what would it be?

I guess for a long time I'd have said losing my parents at such a young age. But looking back, I realize all the things I was forced to endure, and all the steps I've taken on this journey have led me to the place I'm at now.  So I have to say I wouldn't go back and change a thing.

What are you looking for in an ideal mate?

She doesn't need to do anything except love me for myself.  Just me. A woman who would see beyond the tough guy image to what's in my heart. I guess there are guys who want an easy, Sunday kind of love. But I'm not sure I'll ever have an easy love. Like everything else in my life, I'll probably have to fight for her. But whether it's fighting another guy, or even her own family and their prejudices, I'm up for it.  I've been a fighter all my life. Why stop now?  All I know is, I'm a one-woman guy.  And from the first time I saw her on the playground in Haller Creek, I've been head-over-heels, crazy in love with Becca Henderson. And she doesn't even know I exist.

“You shouldn’t be alone. At least for tonight, Becca.”

“Then you believe the shooter will return?” She began wringing her hands. “You think he’ll try again?”

Ben put a hand on her shoulder, hoping to soothe. “I don’t know what to think. I don’t even know who the intended victim is yet. But you’re vulnerable here. No alarm.” He studied the simple key lock. “Not even a dead bolt.” His tone revealed his frustration. “Let me take you home.”

“This is my home. I’m staying here. I’ll . . . ” She looked around frantically. “I’ll jam a kitchen chair against the knob like they do in the movies.”

“This isn’t pretend. This is real life. You shouldn’t be here alone.”

She sank back down in her chair and looked like she might break down at any minute and cry. “You’re scaring me, Ben.”

“As terrified as I feel, I won’t go running home to Daddy and Mommy. I’ve been on my own since college and I’m never going back. I . . . can’t.”

“I get that.” He knelt down in front of her and took her hands in his. Despite the warmth of the room, they were cold. “I understand your need to be independent. But you’ve just had a terrible shock. You’re feeling afraid and vulnerable. You need some time to process what happened tonight. And you need to feel safe. Since your current boyfriend didn’t stick around to protect you, the sensible thing is to go back to your parents’ house, at least for tonight.”

Her head came up sharply. “Why did you say that? Will isn’t my boyfriend. He’s just a friend.”

“We didn’t come together. We just happened to arrive a few days apart.”

“And the dinner tonight? It wasn’t arranged for any big announcement?”

“The only announcement was the one by my father, suggesting that renting this place was wrong. I’m still his little girl, and I belong there, with him.” She shook her head. “That’s why I can’t go back, Ben. If I do, my father will see it as an admission that he was right. I won’t keep fighting all the old battles over and over.”

“All right. I get it.” He stared at their joined hands, then up at her mouth and felt his throat go dry at the thought of tasting those lips. Just being this close, holding her hands, had heat rushing through him. “Tell me what you want to do.”

“I just want to feel safe.” Seeing the way he was studying her, she took in a deep breath. “I’ll lock the door and keep the lights on all night. If I have to, I’ll sleep in this chair, with my cell phone in my lap. That way, if anyone rattles the doorknob, I’ll hear it and dial nine-one-one.”

Needing to put some distance between them, Ben stood and crossed to the window, drawing the drapes. Then he walked to the kitchen, and from there to the laundry room and back door. After some time he made his way to her bedroom and bathroom, before returning to the living room.

He struggled for an official tone. “All right. The back door and windows are secure. When I leave here, lock the front door. Leave all the lights on, including the porch light, so you can see anybody approaching. If there’s trouble, you call immediately.”

Ben held up a hand. “I agreed to take the midnight shift. Since I’m on duty, I’ll make a pass through this neighborhood every hour or two. But I could be called away for emergencies. If I’m off on another call, the state police will cover me. So don’t count on me, you hear? If anything at all bothers you, if you hear a noise outside, a sound you can’t identify, dial that phone.”

“Yes, sir.” At his stern look she managed a smile.

He touched a finger to the curve of her mouth. “I’m glad to see your sense of humor returned. Are you feeling a little stronger?”

“Yes. Maybe your strength is contagious.”

He started toward the door, with Rebecca trailing him. Just as she reached for the handle, he turned. “Lock this when I . . . ”

Their faces were nearly brushing. He breathed her in, and the scent of her filled his lungs. His heart. His very soul.

He leaned close just as she leaned forward. That was nearly his undoing. For one breathless moment he simply stared at her, fighting an almost overpowering need to hold her. To kiss her.

The sudden blaze of heat had him by the throat before he could compose himself. Without realizing it, he lifted a hand to her cheek. “I want to keep you safe, Becca.”

“I’m . . .” His voice was little more than a whisper. “I’m trying really hard to be professional.”

Very deliberately he took a step back, and then another.

She smiled, and his heart did a slow, lazy dip.

“Despite the danger, I’m glad I came home, Ben.”

“Me too.” He managed a sexy grin, though he was feeling none too steady. He opened the door and stepped out onto the porch. “Remember. Lock this.”

He stood perfectly still, staring at the closed door, listening to the sound of the lock being thrown.

As he settled into the sheriff’s vehicle, he sat a moment before turning on the ignition.

His mind wasn’t on the earlier danger. There was only one thing that mattered.

She wasn’t engaged. He felt like he’d just climbed to the top of the highest peak of the Bitterroot Mountains.

His chest was heaving.

His hands were shaking.

His world was rocking.

And he wanted, more than anything, to go back right now and kiss her until they were both breathless.

New York Times bestselling author R.C. Ryan has written more than ninety novels, both contemporary and historical. Quite an accomplishment for someone who, after her fifth child started school, gave herself the gift of an hour a day to follow her dream to become a writer.

In a career spanning more than twenty years, Ms. Ryan has given dozens of radio, television, and print interviews across the country and Canada, and has been quoted in such diverse publications as the Wall Street Journal and Cosmopolitan. She has also appeared on CNN News, and Good Morning America.