Review: The One You Fight For (The Ones Who Got Away #3) by Roni Loren 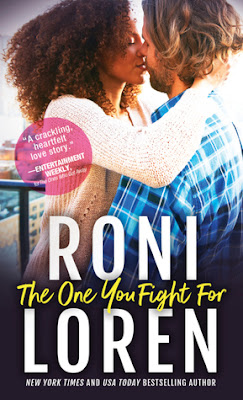 "For the chance to just...be how I want to be with you. I know a clean slate can't exist, but it feels really good to know that tonight I can take you to dinner and not have to watch that I don't slip up and reveal my past, not have to worry that I'm lying to you. I can just...be myself for better or worse. That feels like a special kind of freedom." - Shaw Miller

The One You Fight For
Author: Roni Loren
Series: The Ones Who Got Away #3
Publisher: Sourcebooks Casablanca
Published: January 1, 2019
Source: Publisher

How hard would you fight for the one you love?

Taryn Landry was there that awful night fourteen years ago when Long Acre changed from the name of a town to the title of a national tragedy. Everyone knows she lost her younger sister. No one knows it was her fault. Since then, psychology professor Taryn has dedicated her life’s work to preventing something like that from ever happening again. Falling in love was never part of the plan…

Shaw Miller has spent more than a decade dealing with the fallout of his brother’s horrific actions. After losing everything—his chance at Olympic gold, his family, almost his sanity—he’s changed his name, his look, and he’s finally starting a new life. As long as he keeps a low profile and his identity secret, everything will be okay, right?

How do you find your happy ending?

The One You Fight For, the third book in Roni Loren's extraordinary The Ones Left Behind series, gives readers yet another dimension to an already emotionally charged series surrounding the survivors of a deadly school shooting. If you thought the first book pushed the boundaries, then wait until you start reading The One You Fight For. As a society, we never really pause to think about what the attacker's family goes through after the event. Their world is upended just as much as everyone else's, but yet we never really consider that. Roni Loren pushed that boundary and rightfully so because it made this book so very heartbreaking and heartwarming all at the same time.

Survivor Taryn Landry has a secret, one that has torn her apart inside for the past 14 years. In many ways, she's lost more than everyone else. In addition to the death of her friends, Taryn's younger sister was also killed in the shooting. Now an only child, it's up to her to keep her family together. This ways heavily on her. And that secret? It's driven Taryn to work herself to the bone in hopes of getting her program into schools in hopes to stop future shootings. So yeah, she's got a lot on her plate.

Shaw Miller has his own secret. He many not have been at the prom that fateful night, but his life shattered the moment his brother pulled the trigger. From that moment on, he was only known as Joseph's brother and judged in the fear that what happened was hereditary. All it took was one altercation for the public to paint him as aggressive. Without the full story, I might add. Although he's taken the leap to open a gym with his college buddy, Shaw can never let his guard down. Then Taryn enters his life...

I loved The One You Fight For so much I was up until the wee hours in the morning to read it and then woke up with the sun to finish it the next day. From Loren's writing to her characters, I was in total awe of this book. I love the fact that she goes there with this series. She takes the challenge and runs with it. Kudos to her! I am so looking forward to Kincaid's book next.

Roni Loren wrote her first romance novel at age fifteen when she discovered writing about boys was way easier than actually talking to them. Since then, her flirting skills haven’t improved, but she likes to think her storytelling ability has. She holds a master’s degree in social work and spent years as a mental health counselor, but now she writes full time from her cozy office in Dallas, Texas where she puts her characters on the therapy couch instead. She is a two-time RITA Award winner and a New York Times and USA Today bestselling author.