Spotlight: The Military Wife (A Heart of a Hero #1) by Laura Trentham 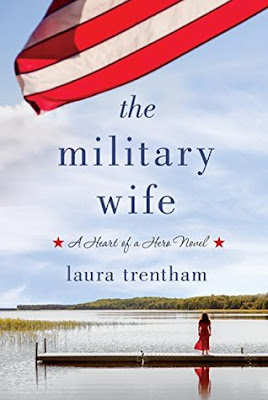 A young widow embraces a second chance at life when she reconnects with those who understand the sacrifices made by American soldiers and their families in award-winning author Laura Trentham’s The Military Wife.

Harper Lee Wilcox has been marking time in her hometown of Kitty Hawk, North Carolina since her husband, Noah Wilcox’s death, nearly five years earlier. With her son Ben turning five and living at home with her mother, Harper fights a growing restlessness, worried that moving on means leaving the memory of her husband behind.

Her best friend, Allison Teague, is dealing with struggles of her own. Her husband, a former SEAL that served with Noah, was injured while deployed and has come home physically healed but fighting PTSD. With three children underfoot and unable to help her husband, Allison is at her wit’s end.

In an effort to reenergize her own life, Harper sees an opportunity to help not only Allison but a network of other military wives eager to support her idea of starting a string of coffee houses close to military bases around the country.

In her pursuit of her dream, Harper crosses paths with Bennett Caldwell, Noah’s best friend and SEAL brother. A man who has a promise to keep, entangling their lives in ways neither of them can foresee. As her business grows so does an unexpected relationship with Bennett. Can Harper let go of her grief and build a future with Bennett even as the man they both loved haunts their pasts?

Winters in Kitty Hawk, North Carolina, were temperamental. The sunshine and a temperate southerly breeze that started a day could turn into biting, salt-tinged snow flurries by afternoon. But one thing Harper Lee Wilcox could count on was that winter along the Outer Banks was quiet.

The bustle and hum and weekly rotation of tourists that marked the summer months settled into a winter melancholy that Harper enjoyed. Well, perhaps not enjoyed in the traditional sense . . . more like she enjoyed surrendering to the melancholy. In fact, her mother may have accused her of wallowing in it once or twice or a hundred times.

In the winter, she didn’t have to smile and pretend her life was great. Not that it was bad. Lots of people had it worse. Much worse. In fact, parts of her life were fabulous. Almost five, her son was happy and healthy and smart. Her mother’s strength and support were unwavering and had bolstered her through the worst time of her life. Her friends were amazing.

That was the real issue. In the craziness of the summer season, she forgot to be sad. Her husband, Noah, had been gone five years; the same amount of time they’d been married. Soon the years separating them would outnumber the years they’d been together. The thought was sobering and only intensified the need to keep a sacred place in her heart waiting and empty. Her secret memorial.

She parked the sensible sedan Noah had bought her soon after they married under her childhood home. Even though they were inland, the stilts were a common architectural feature up and down the Outer Banks.

Juggling her laptop and purse, Harper pushed open the front door and stacked her things to the side. “I’m home!”

A little body careened down the steps and crashed into her legs. She returned the ferocious hug. Her pregnancy was the only thing that had kept her going those first weeks after she’d opened her front door to the Navy chaplain.

“How was preschool? Did you like the pasta salad I packed for your lunch?”

“It made me toot and everyone laughed, even the girls. Can you pack it for me again tomorrow?”

“Ben! You shouldn’t want to toot.” Laughter ruined the admonishing tone she was going for.

As Harper’s mom said time and again, the kid was a hoot and a half. He might have Harper’s brown wavy hair, but he had Noah’s spirit and mannerisms and humor. Ben approached everything with an optimism Harper had lost or perhaps had never been gifted with from the start. He was a blessing Harper sometimes wondered if she deserved.

Of course, her mom had picked an unconventional name. “Grandmother” was too old-fashioned and pedestrian. Since she’d retired from the library, she had cast off any semblance of normalcy and embraced an inner spirit that was a throwback to 1960s bra burners and Woodstock.

“Upstairs painting.” Ben slipped his hand into Harper’s and tugged her toward the kitchen. Bright red and orange and blue paint smeared the back of his hand and arm like a rainbow. At least, her mom had put him in old clothes. “Yaya gave me my own canvas and let me paint whatever I wanted.”

“And what did you paint?” Harper prayed it wasn’t a nude study, which was the homework assignment from her mom’s community college class.

“I drew Daddy in heaven. I used all the colors.” The matter-of-factness of his tone clawed at her heart.

No child should have to grow up only knowing their father through pictures and stories. Her own father had been absent because of divorce and disinterest. He’d sent his court-ordered child support payments regularly until she turned eighteen but rarely visited or shown any curiosity about her. It had hurt until teenaged resentment scarred over the wound.

Noah would have made a great dad. The best. That he never got the chance piled more regrets and what-ifs onto her winter inspired melancholy.

“I’m sure he would have loved your painting.” Luckily, Ben didn’t notice her choked-up reply.

Laura Trentham is an award-winning author of contemporary and historical romance. She is a member of RWA, and has been a finalist multiple times in the Golden Heart competition. A chemical engineer by training and a lover of books by nature, she lives in South Carolina.