Review: For the Love of a SEAL (Hearts of Valor #3) by Dixie Lee Brown 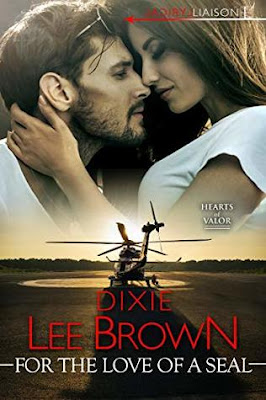 This is Blake Sorenson’s story.

The security company that former SEAL Blake Sorenson works for helps him stay in fighting form—physically and mentally. He has little time for distractions of the female variety, which is fine with him. His fickle ex-wife taught him that love and loyalty don’t mix. Which is why he should eighty-six the rookie reporter he finds in his helicopter. The sexy stowaway in red stilettos is sure to be trouble. . .

A single mom, Tori Michaels can’t afford to lose her job because of an impossibly arrogant ex-sailor. But hitching a ride with Blake puts her right in the middle of a conflict brewing between the law and a dangerous hate group. When suspicions are raised over which side Tori is on, Blake has to choose whether to trust in her innocence or lose her. But in choosing to protect her, he’s making himself vulnerable to a desire he thought he’d never feel again—and an enemy he doesn’t see coming. . .

Let's take a quick trip down memory lane... The year was 2013 and I had just been picked to be an Avon Addict. It was during that time when I was introduced to some of my favorite authors, one of them was Dixie Lee Brown. I freaking loved her Trust No One series. In fact, I kind of want to carve out some time to re-read them. A few months ago, Dixie popped into my head and I wondered if she was still writing. Imagine my happy surprise that she not only has a new series, but was about to release the second book, Honor Among SEALs. Talk about perfect timing, am I right? I devoured it and promptly forgot to review it. I will revisit it soon. Now we have the third book in Dixie's Hearts of Valor series, For the Love of a SEAL. All is right in my romantic suspense world...

In For the Love of a SEAL, we meet Blake Sorenson and Tori Michaels. Blake hates being called a hero. He feels that nothing of his time as a SEAL should bring him fame and notoriety, so when Tori appears asking for an interview, his initial response is fuck no. He's done things he isn't proud of. He's lost brothers in the battlefield. To be hailed a hero for this is something pisses him off. Why he invited Tori on his helicopter is beyond him, but here she is and things are about to get very hairy. Tori, on the other hand, has her secrets. She'd rather not get close to Blake, but after her boss threatened her job if she didn't get the interview, Tori has no choice but to jump into Blake's helicopter. And like I said before, things get hairy. Both Tori and Blake are forced into life or death situations that bring them closer and makes them face their pasts.

I love Dixie Lee Brown's writing style. Her romantic suspense books are the perfect mix of romance with suspense that keeps me guessing. She leads you down one road and you think you know what is happening for most of the book, only to take a sudden turn at the end. I loved that Dixie kept me on my toes throughout the book. The action scenes were fantastic. I thought I knew who was behind the attacks, but I was wrong. I love authors that can do that. The romance between Blake and Tori was equally amazing. Their attraction was red hot. The sexual tension between them sizzled. I loved that both of them held their own with their lives were on the line. That definitely overflowed into the bedroom. The banter between them was fantastic. I loved them both as a couple and as strong individuals.

Overall, For the Love of a SEAL was fabulous. I hope that there are more books in the Hearts of Valor series. I'm so glad that I re-discovered Dixie Lee Brown. Her books are amazing and I want more.

Dixie Lee Brown lives and writes in Central Oregon, inspired by gorgeous scenery and three hundred sunny days a year. Having moved from South Dakota as a child to Washington, Montana and then to Oregon, she feels at home in the west. She resides with two dogs and a cat, who are currently all the responsibility she can handle. Dixie works fulltime as a bookkeeper. When she's not writing or working, she loves to read, enjoy movies, and if it were possible, she’d spend all of her time at the beach. She is also the author of the Trust No One romantic suspense series, published by Avon Impulse.