Review: Just a Heartbeat Away (Forever Yours #1) by Cara Bastone 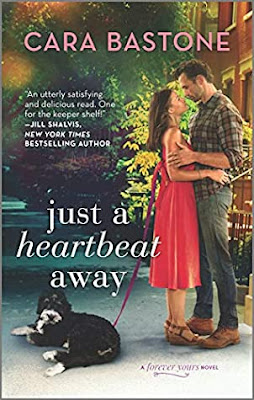 "You be grateful. Grateful that you're here. That your little boy has a good, loving, competent father. A father who leaps a fence to sprint him to the ER and makes Raspberry Beret pancakes and tells him the truth about the dates he goes on." - Via DeRosa

Newly widowed dad Sebastian Dorner was unraveling at the edges—until his son’s teacher, Via DeRosa, threw him a lifeline. Now, two years later, they reconnect at Matty’s new school, and an inconvenient but unmistakable jolt of attraction crackles between them. But why does the first person to spark with Sebastian in years have to be a millennial? Is twentysomething Via really too young for him or does fortysomething Sebastian just feel too damn old?

A former foster kid, Via’s finally forged the stable life she’s always dreamed of—new job, steady income, no drama. The last thing she needs are rumors about her and a single dad at school. But why does she keep being drawn into his capable, worn-flannel orbit? And why does being around Sebastian, Matty and even their dog, Crabby, seem to spark so much want?

They’re trying to ignore the tension threatening their friendship. But sometimes what’ll heal you is just a touch—and a heartbeat—away…

Hello friends! As a romance reader, I've noticed that I have a lot of favorites and I tend to stick with them. For me, it's typically a contemporary romance with two characters that are traditionally attractive and are roughly the same age. Translation: I like romances with two attractive characters who have little to no age gap. Why is that? I don't know. Yes, I do love books with a plus sized heroine, but even then I feel like it's not out of my norm.

When I picked up Just a Heartbeat Away, three things stuck out at me. The first is the age difference between Seb and Via. I was super hesitant at first, but still went with it. By the end of the book, I was all for the age gap. Seb and Via are in completely different places in their lives, but they made it work. In a lot of ways, these differences complimented each other perfectly. Via needed a connection with someone that'll be a steady presence in her life and Seb fits that bill. Seb needed someone to bring a spark back into his life and Via definitely accomplished that.

The second aspect of the book that stood out to me was Sebastian isn't "traditionally" handsome. He's got that tall lumberjack look going for him. I'm sorry to say he reminded me of a lesser attractive Luke from Gilmore Girls. I feel like such an ass for saying that, but it's true. It worked for Via and it worked for me. I mean, I didn't even notice his appearance on the cover until after I finished the book. The model they picked for the cover is just how I pictured Seb.

The last aspect of the book that stood out was the pacing of the romance. To say that Just a Heartbeat Away was a slow burn would be an understatement. There were a lot of hurdles that both characters had to conquer before they could have their HEA and let me tell you, the author did not skim over any of them. She allowed both Seb and Via plenty of time to work through whatever was in their way. There were moments when I had wished things would move faster, but looking back at the book I know how that the pace was perfect.

I am so glad that I stepped out of my romance comfort zone to read this book. Just a Heartbeat Away was breathtaking. Everything about it was perfection. And the fact that it is Cara Bastone's debut novel. Like... what?! Seriously, this book will stick with me for quite a while. It was that good.

Cara Bastone is a full time writer who lives and writes in Brooklyn with her husband, son, and an almost-goldendoodle. Her goal with her work is to find the swoon in ordinary love stories. She’s been a fan of the romance genre since she found a grocery bag filled with her grandmother’s old Harlequin Romances when she was in high school. She’s a fangirl for pretzel sticks, long walks through Prospect Park, and love stories featuring men who aren’t crippled by their own masculinity.