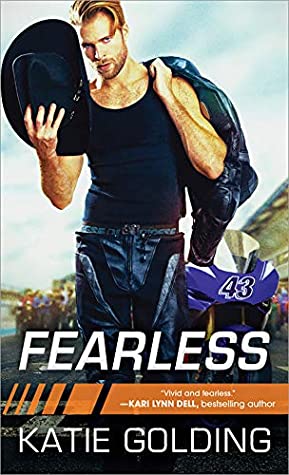 "See? We're both avoiding each other, and we both end up in the same place. We're supposed to be together, damn it, and you don't walk away from that." - Bill King
Fearless
Author: Katie Golding
Series: Moto Grand Prix #1
Publisher: Sourcebooks Casablanca
Published: July 28, 2020
Source: ARC review
Buy Links: Amazon - Barnes & Noble - iBooks - Kobo - Google Play
Add to Goodreads
Billy King may be smiling under his black Stetson as he waves for the MotoGP press corps, but the plain truth is the motorcycle racer is hurting: for his horse back in Memphis, for his girl with one boot out the door, and thanks to an injury that's not getting any better.
With his racing contract contingent on his latest injury remaining a secret, Billy bolts home at the end of the international circuit―resolved to heal, and ready to win fellow racer Taryn's heart a second time. Hopefully, before the love of his life is gone for good. But broken hearts don't heal overnight, and the cost of forgiveness is sky high...unless Billy can prove his heart is home to stay.

Welcome to the curious case of Fearless by Katie Golding... At first glance, it should have two things going against it. One it's written in first person. And two, it has a lot of flashbacks. Both are elements I normally don't like in books. But holy crap, it worked like a damn charm in Fearless. I have never enjoyed flashback scenes as much as I did in this book. I was actually looking forward to them just as much as present day, which is a good thing because it switches every other chapter. Both tell the full story of Billy and Taryn's relationship: the good, the bad, and the ugly. It shows how their relationship blossomed and how it crumbled from one mistake. Through all of that, readers watch as they attempt to rebuild trust in hopes of having a future together. I know it sounds like a lot, but trust me, it works in this book. As for the first person perspective, it still wasn't a favorite, but again it just works.
There was one element of Fearless that confused me for most of the book. I never knew how much time had past from their break-up to events in the present day. Sometimes it felt like events in a flashback scene happens a couple years prior and sometimes it felt like it was a month or two. I wouldn't say it took something away from the story, I just wish it had been said how much time had passed.
Overall, I enjoyed the hell out of Fearless. The characters were great. The writing was fun. Just a fantastic romance from start to finish.

Katie Golding is a racing fan with a writing problem. The recovering cheerleader lives in a small town outside of Austin, Texas, mom to a future philanthropist, and wife to a superman. Her writing playlists range from 80s love songs, 90s grunge, 00s punk, to new age underground in less time than it takes her to burn dinner, and she is currently at work on her next romance novel—unless she’s tweeting about it.
Website - Facebook - Twitter - Instagram