Hooked on You by Lindsey Brookes 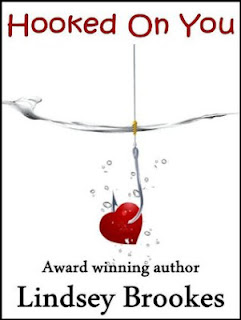 Title: Hooked on You
Author: Lindsey Brookes
Published: June 11, 2012
A (not so) brief synopsis from Good Reads:
Chase Reynolds donated to a sperm bank years before while working on the police force, having no idea that a few months later an injury would leave him unable to father his own child. Now divorced and working as a private investigator, he’s about to find himself facing a past he’d just as soon forget.

When Shay McDaniels learns that her father has been receiving threatening letters, she heads to the resort he owns in the Keys, hoping to convince him to bring in the police. He stubbornly refuses, telling her that bad publicity of any sort could hurt his business.

Chase has no idea that the young woman he meets on the beach, the one whose son is determined to ‘catch his mommy a man’ is James Lansing’s daughter and grandson. The background check he’s done on James Lansing has his daughter currently living in Miami. So when he catches glimpses of her talking to James, even hugging him, she moves to the top of Chase’s suspect list.

For the first time since her divorce, a man succeeds in stirring Shay’s passion. But more importantly, he makes her son smile. Unfortunately, Chase Reynold’s constant proximity to her father stirs her suspicion as well.
When James Lansing invites both Shay and Chase to join him in the private dining room, they discover each other’s true identities. Then Lansing informs Chase he’s to become his daughter’s personal bodyguard until the situation with the threats is taken care of. Being thrown together twenty-four hours a day is the last thing Chase wants, considering the growing feelings he has for Shay. Distraction can make a man careless. But he accepts, determined to protect her and her son with his life.

Shay finds herself falling for her ‘bodyguard’, a man determined to keep his heart at bay because he believes she deserves a man who can give her more children. Can she convince him he really is her happily-ever-after? Or will secrets uncovered succeed in tearing them apart?


My Thoughts:
Let me start by saying that I got this book when it was free on Amazon shortly after it was published. I love free books because you can find diamonds in the rough. Hooked on You was a diamond. I love books that are quick, fun reads with a bit of sex appeal. With the exception of James, I felt the characters were well developed. Chase "Tarzan" Reynolds' background felt real, although I was perplexed about his injury and why it caused him to be infertile. Shay's background was hysterical with her "queen" of an ex-husband. Her son was adorable.  I did feel that James' health issue should have been given more page time. It felt like it was a last minute addition because there were no hints given. As for Shay's friend, I really hope Ms. Brookes writes a sequel and gives Dee her own story.


I love reading books like Hooked on You. It was a fun read that I stayed up to finish because I was having too much fun in their world. It is a good thing Good Reads doesn't track time on your status updates. :)
Posted by CrystalBee at 12:37 PM