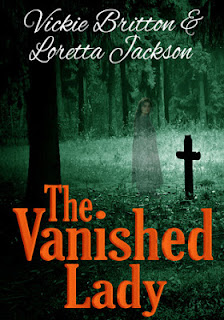 Synopsis from Goodreads:
Dana Lawrence doesn’t imagine when she buys the quaint Victorian house in the remote mountains of Colorado that her life will soon be in danger. She has heard the legend of Lelia Glenn and how she vanished in the 1800’s, but no one told her about the more recent disappearance of Amy Walden two years ago.

On the night of her arrival, Dana spies someone digging on her land. The sheriff tells her that on the day Amy disappeared Glenndale’s jewelry store was robbed. Amy’s boyfriend, Donnie Thorpe, is still on the run, and his accomplice, Jed Hoyt, has just been released from prison. Bennett believes a third party masterminded the robbery--her handsome neighbor, Logan Rand.
While Dana tries to beat the thieves to the stolen goods, she uncovers a grave. Threats and attempts on her life follow in rapid succession. Dana must identify the killer before she becomes the next vanished lady.

My Thoughts:
It has been awhile since I've read an "everyone's a suspect" type of mystery. Lately, I've been gravitating towards suspense novels where there is one bad guy and it is fairly obvious who that person is. I love both types and I really need to get back into the genre. That is why I jumped at the chance to read and review The Vanished Lady.

When I first started reading The Vanished Lady, I had to keep notes to help me keep track of the characters and their connections to each other. Dana is an ambitious woman from an artistic background. She sees this beautiful house and instantly knows that she can restore it. On there other hand, I kept thinking she was whacked out of her gorge for buying a creepy house with an equally creeped out abandoned mine. There is no way on Earth I would do the things she does in the book. I would be packed and in my car in 10 seconds flat. :) After buying the house, she meets just about everyone that lives in the town. First, there are her neighbors Logan Rand and Verla Glenn-Darlington (and her grandson Arley). While trying to solve the mystery, Dana meets most of the important people in town. They aren't important solely for the story, but they are prominent town people.

You really get two mysteries for the price of one with this book, but the story of Amy is the plot that drives the characters. While Lelia is important to the town, she is really the motive behind the robbery of Garrity's Gallery and the disappearance of Amy. What I loved about the story was that everyone had a motive and I thought that everyone was guilty at one point in the story. When the person was revealed, I went back to see if there were little clues pointing at them. Yes! They were very small, but the clues where there. Its best if you don't cheat (like I almost did) and skip to the ending. :)

I loved The Vanished Lady. It reminded me a lot of a classic "whodunit" where there is one person you know for certain is innocent and everyone else is guilty of something. You feel compassion with Amy and Dana, suspicious of just about everyone else, and confusion with Logan. This may sound weird, but I also felt like the ending was given ample time to tie up all the loose ends. It wasn't rushed and it wasn't too long, but I would have liked to see how the person apprehended. Is that mean? :)

I sincerely hope that the authors write more books like The Vanished Lady in the future.
Posted by CrystalBee at 10:38 PM