Made for Two by Karen Lenfestey 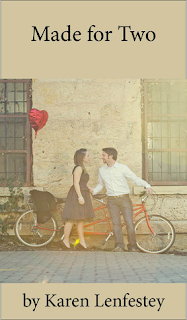 I originally read/reviewed this book on Goodreads in December.

Diane acted on instinct when she broke up a fight at the inner-city school where she teaches. When the superintendent suspends her, Diane returns to her hometown of Foxworth. Almost immediately she finds herself tracking down her old boyfriend, Tim. Just seeing him rekindles her love and she realizes that her life, just like her tandem bike, was made for two.

Unfortunately, Tim keeps pushing her away, claiming it will never work out. After all, she still wants to live in the city and he can’t imagine leaving his family’s bakery. But Diane discovers there’s more to it than that. Tim has been hiding in this small town because he has a secret.

My Thoughts:
This was the first book I read from Karen Lenfestey and it will not be the last. Diane, the main character, is given a huge blow at the beginning of the book when she tries to break up a fight in an inner city school. The repercussions that she faces really pushes her into a tailspin and she goes home to lick her wounds. While there, she decides that it is time to face her past and hopefully make amends with her best friend and her first love. What I loved about Diane was that she seemed real. She was not perfect. She didn't give up when she was on the brink of losing her job. She fought to make amends with her best friend, Kim, and to rekindle her love with Tim. Meanwhile, she helps her mom heal after the death of her dad. None of the characters were perfect and that made the story seem real.

For a novella, there was a lot going on. Never a dull/slow moment. The one aspect of the story that kept me from giving it 5 stars was the ending. I felt like the ending was a little rushed. I would have liked a little more build-up and more closure with certain characters. Made for Two isn't just a light read. The symbolism of the bike and the idea of going back home to face your past truly makes you think of what might have been.
Posted by CrystalBee at 3:36 PM