The Summer He Came Home by Juliana Stone 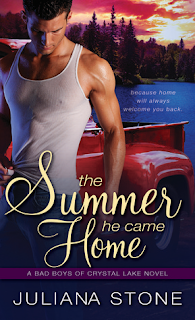 Falling asleep in a different bed every night has made it easy for Cain Black to forget his past. It’s been ten years since he packed his guitar and left Crystal Lake to chase his dreams. Now tragedy has forced him home again. And though Cain relishes the freedom of the road, one stolen moment with Maggie O’Rourke makes him wonder if he’s missing out on something bigger than fame.

For Maggie—single mother and newly settled in Crystal Lake—love is a luxury she just can’t afford. Sure, she appreciates the tall, dark and handsome looks of prodigal son Cain Black. But how long can she expect the notorious hellion to stay?

The last thing either of them wants is something complicated. But sometimes love has its own plans.

My Thoughts:
Honestly, I don't know where to start with this one. It threw me on a rollercoaster of emotions . . .

Cain Black is home. He's home for his friend's funeral and he doesn't know how to feel about it. Should he be happy to be home? Will he be welcomed? After a debacle that was his final concert with his band, Cain's future is up in the air. He didn't know that he would meet Maggie, a woman who could potentionally piece his life back together. Maggie and her son, Michael, have secrets. No one in town knows their past and they want to keep it that way. Together, Maggie and Cain form a bond that'll put both their futures at risk.

Was that enough of a tease?

What did I love about the book? The characters! Never have I met a group of characters that made me want to cry so freaking much. Going home for a funeral is not a happy event and I'm glad the characters felt the way they did. Cain wasn't sure he'd be welcomed because of how long he was away. Jack, a war veteran, had to come home to bury his twin brother. Mac, an architect, is forced to face his family. Cain needed to reconnect with his two best friends just as much as he needed to fall in love with Maggie and her son. The six of them (including newly widowed Raine) needed each other. Its sad when it takes a funeral to bring people together, but I think Jesse would be happy to watch it all play out. Through their faults and their questionable pasts, that made the characters so realistic that I wanted to reach out and hug Maggie.

I do have one itty bitty problem with the book and that is the rushed ending. Maggie's marriage was so horrific and I felt it needed more time for the ending to develop. I'm hoping that Juliana will revisit Cain and Maggie's bumpy road to the alter (i.e. her divorce) in the next two books in the series. I just felt that the ending with Maggie's husband wrapped up a little too neatly.

I loved this book and I am really looking forward to the rest of the series. The somber storyline was not what I was expecting, but it made the book that much better. I just want to give all the characters a hug.

Posted by CrystalBee at 9:27 PM