My book bag runneth over!

Today was a fun day filled with used books and Barnes & Noble. Odd combination, no?

For the past week, I've been a little obsessive about working on my small library (aka book collection). Since my book purge from hell (more on that at a later date), I've tried to keep my physical library down to my favorite "must purchase in paperback" authors. Right now, it consists of Lisa Jackson, Rachel Gibson, Tess Gerritsen, Iris Johansen, and Alex Kava. So I decided that it would be smart to put a book list together and mark off which books I own. That way I'll avoid buying duplicates. Lets just say that it happens WAY too often. Anyhoo, I make my lists, print them out, and I'm ready to go. I picked up 9 books in total today: 7 Lisa Jackson books and 2 Iris Johansen books.

Want a peak into my book bag? 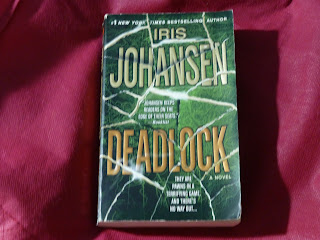 In Iris Johansen's Deadlock, Emily Hudson is a renowned archaeologist who travels the world to save priceless artifacts from theft or destruction. Her best friend and partner, Joel Levy, is always at her side—until one day, when her entire crew comes under attack. Joel and Emily are held hostage by a sadistic captor who is determined to find the missing link to a legendary treasure. For weeks they struggle to survive against terrifying odds, pushed to their limits—and beyond…

John Garrett has worked for the CIA, British intelligence, and whoever else was willing to pay for his services. This time, a Washington operative hands him what at first appears to be just another assignment: to track down, and save, Emily and Joel. But it quickly becomes much more, especially when Garrett finds himself drawn to someone as dauntless and bent on revenge as Emily. Soon, they’re catapulted into an astonishing adventure in which nothing—and no one—is what it seems. And lives hang in the balance as one man and one woman unravel the explosive truth behind a conspiracy hidden for generations. 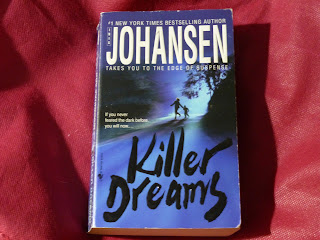 If you close your eyes, he’ll get you. Sophie Dunston knows all too well how dreams can kill. As one of the nation’s top sleep therapists, she specializes in the life-threatening night terrors that her ten-year-old son, Michael, suffers from. But she is also an expert in another kind of terror–the kind that can turn a dream life into a living nightmare in the blink of an eye.

Someone is watching. He’s a shadowy figure from out of her darkest fears and he hasn’t forgotten her. In one shocking moment of violence, he’d shattered Sophie’s world forever and left her with only one thing to live for: her son. But the nightmare isn’t over for Sophie Dunston. It’s just begun. He’s been waiting. Sophie was supposed to die the first time around, but fate intervened. This time he’ll make sure that not even a miracle will save her.

It wasn’t a miracle that saved Jock Gavin, but it was pretty close. A semiretired hit man, commando, and jack-of-all-deadly-trades, he knows what Sophie is up against–and that she’ll need help. But the man he’s chosen for the job is as unpredictable as he is dangerous. Matt Royd is a wild card–hard, cool, merciless–and putting him into play changes the game completely. But to whose advantage?

Sophie will soon find out. She will have to trust Royd because she has no choices left. Because the bogeyman haunting her dreams is all too real and he’s on the hunt again. Because the nightmare he’s got planned for Sophie won’t end when she wakes up screaming. It won’t end. Ever. 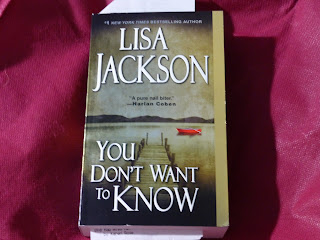 
In Ava’s dreams, her son, Noah, looks just the way she remembers him: a sweet two-year-old in rolled-up jeans and a red sweatshirt. When Ava wakes, the agonizing truth hits her all over again. Noah went missing two years ago, and his body has never been found. Almost everyone, including Ava’s semi-estranged husband, Wyatt, assumes the boy drowned after falling off the dock near their Church Island home. Ava has spent most of the past two years in and out of Seattle mental institutions, shattered by grief and unable to recall the details of Noah’s disappearance. Now she’s back at Neptune’s Gate, the family estate she once intended to restore to its former grandeur. Slowly, her strength is returning. But as Ava’s mind comes back into focus, her suspicions grow. Despite their apparent concern, Ava can’t shake the feeling that her family, and her psychologist, know more than they’re saying. But are they really worried for her well-being — or anxious about what she might discover? Unwilling to trust those around her, Ava secretly visits a hypnotist to try and restore her memories. But the strange visions and night terrors keep getting worse. Ava is sure she’s heard Noah crying in the nursery, and glimpsed him walking near the dock. Is she losing her mind, or is Noah still alive? Ava won’t stop until she gets answers, but the truth is more dangerous than she can imagine. And the price may be more than she ever thought to pay… 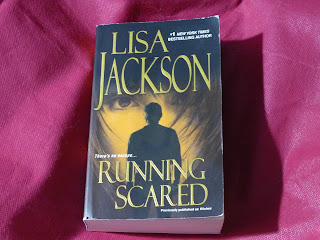 
Fifteen years ago in Boston, Kate Summers made a bargain: she became the mother of a perfect, beautiful newborn baby, and she promised she would never breathe a word about the adoption to anyone. Now Kate has built a good life for herself and her son, Jon, in a small town in Oregon. She has almost forgotten her fear that he will somehow be taken away. Then Daegan O'Rourke arrives in town and strikes up a friendship with her and Jon. Daegan has his own past to hide - one with shocking ties to hers. Someone is searching for Kate and her son and is willing to go to any lengths to claim him. And the one man Kate is tempted to trust has dangerous secrets that could change her world forever. Soon, the past Kate thought she could outrun will explode, unearthing a legacy of lies and treachery and a fury powerful enough to kill. 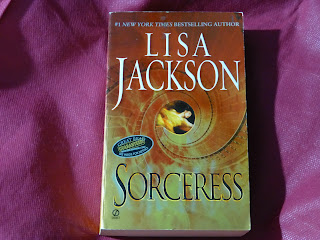 THE WATCHER: He smells her. Feels her. Knows she is coming. Chosen by the Fates, she is the one. Only she can lift the curse of darkness. But he will stop her-and he will sacrifice her.

THE WOMAN: Flame-haired and green-eyed, Bryanna looks enchanted but has always felt cursed, plagued by mysterious visions and voices. Bound by destiny to save an innocent life, Bryanna follows her path alone-until she meets a stranger deep in the woods.

THE WARRIOR: Gavyn is a wanted man, as dark and dangerous as the wolf that shadows his footsteps. But his touch is electric, and he has much to teach-if Bryanna is willing to learn... 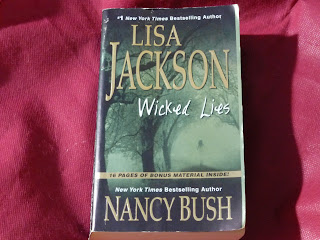 
For two years, Justice Turnbull has paced his room at Halo Valley Security Hospital, planning to escape. Justice has a mission - one that began with a vicious murder two decades ago. Laura Adderley didn't plan to get pregnant by her soon-to-be ex-husband, though she'll do anything to protect her baby. But now reporter Harrison Frost is asking questions about the mysterious group of women who live at Siren Song lodge. Harrison hasn't figured out Laura's connection to the story yet. But Justice knows. And he is coming...All her life, Laura has been able to sense approaching evil. But that won't stop a psychopath bent on destroying her. Justice has been unleashed, and this time, there will be no place safe to hide. 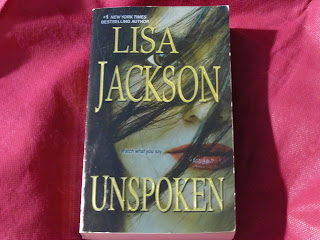 Shelby Cole thought she'd put Bad Luck behind her. Bad Luck, Texas, that is. She'd left her hometown ten years ago, her world shattered and her illegitimate baby dead. Now she's receiving anonymous letters claiming that her daughter is alive. But going home means demanding answers that her father, Judge Jerome Cole, won't be happy to give -- and facing Nevada Smith, the man who broke her heart. 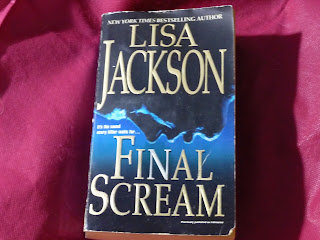 
As white-hot flames sear the dark night, a killer waits in the trees, watching the mill burn, listening for the screams - the only proof that justice has finally begun for the sins of long-ago. For journalist Cassidy Buchanan, this inferno is a living nightmare - a reminder of the horrible, mysterious fire that destroyed her wealthy family seventeen years ago - and of Brig McKenzie, the handsome hell raiser accused of setting the blaze. That tragic crime has never been solved, and already the whispers have begun in Prosperity, Oregon - another fire, more deaths, and one common denominator - Cassidy herself. Cassidy came home to Prosperity to put the past behind her, but it seems the past isn't finished with Cassidy. Someone doesn't want her to uncover the chilling truth...someone who has killed before and will kill again...a cold-blooded psychopath who is only waiting to hear her... 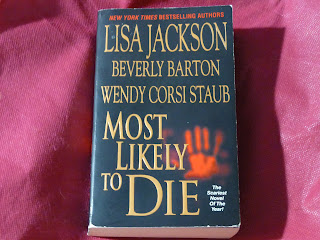 Most Likely to Die
Published: 2007


It's been twenty years since the night Jake Marcott was brutally murdered at St. Elizabeth High School. It's a night that shattered the lives of Lindsay Farrell, Kirsten Daniels, and Rachel Alsace. It's a night they'll never forget. A killer will make sure of that...A 20-year reunion has been scheduled for St. Elizabeth's. For some alumni, very special invitations have been sent: their smiling senior pictures slashed by an angry red line...Three women have been marked for death. Tonight, as the music plays, and the doors of St. Elizabeth are sealed, a killer will finish what was started long ago, and the sins of the past will be paid for in blood...
Posted by CrystalBee at 10:51 PM

Email ThisBlogThis!Share to TwitterShare to FacebookShare to Pinterest
Labels: hauls