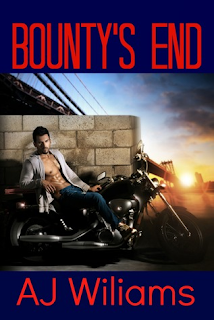 Thomas has reached a point in his life where he is done with bounty hunting. He is finally ready to take the step in following his dream and hopefully put his family back together. However, before that happens, he has to rescue his neighbor—the woman he has been lusting after—from unsuspecting danger that lurks at every corner.

Wen has been in love with her neighbor, Thomas, for the last six months. Yet, with his schedule and her inability to welcome a new relationship, Wen is certain that her love will stay hidden. It does, until she learns that she’s being followed. Not wanting to intrude on her family, she calls Thomas.

Can Thomas rescue Wen and his dream? Or will danger permanently keep him from both?

My Thoughts:
Much like the first book in Wiliams' Bounty series, Bounty's End was a fun and steamy quick read with lovable characters.

Thomas Anders is done with being a bounty hunter. He's had to watch his family put themselves into danger and he's had enough. His post-bounty hunter dream is to open a garage with his family and (hopefully) settle down with Wen Snow. Wen, on the other hand, leads a quiet life after being humilated by her ex-fiance and has stopped Thomas' advances before she finally gives in to a coffee date. Sparks fly as Thomas protects Wen from the person following her... The same people that has been breaking into her parent's antique shop and are now breaking into her home.

I love the characters that A.J. has created. It was fun getting to know Keylee and Hunter in the first book. And now we get to know more about Thomas and meet a new character, Wen. Thomas has two sides. He is all badass, motorcycle drivin' bounty hunter, but once Wen is in his arms, Thomas is a sweet and caring man. I didn't get to know Thomas very well in the first book, but after this one, I adore him. Wen, bless her heart, is pretty much the exact opposite. She tries to be all big and bad to protect herself, but she fails miserably. I usually like female characters to be able to take care of themselves, but I really liked Wen. She had the guts to take down the people who broke into her house. Even though she went soft on them once they were apprehended.

I really enjoyed Bounty's End. The characters were fun and the sex between them was scorching. However, I still wish the book was a little bit longer. The length of time building up Thomas and Wen's relationship was fantastic. I just thought the mystery behind the break ins could have been fleshed out a bit more. I was a little confused about the two people that broke into her house. My opinion, that needed a little more explanation. Other than that, it was great reconnecting with the characters. I like getting to know Thomas more and finding out more about the events in Keylee's story. I really look forward to getting Alec's and Jefferson's stories next.

A.J. brings a new reading experience to her readers. The four books in the Bounty series take place simultaneously. Each book has its own story, but the readers also get a deeper glimpse into the story that took place in the first book. Therefore, it is recommended to read the books in order to get the full experience.