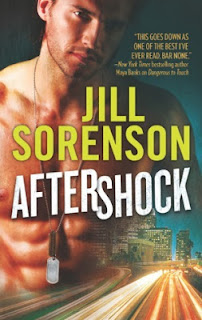 As an emergency paramedic, Lauren Boyer is dedicated and highly capable. Until an earthquake strikes, trapping her beneath the freeway with a group of strangers--including Iraq war veteran Garrett Wright...

...BETWEEN PERIL AND PASSION

Handsome and take-charge Garrett aids Lauren in her rescue efforts, even as the steely look in his eyes seems to hide dark secrets. When a gang of escaped convicts goes on the attack, Garrett's bravery makes him more than a courageous bystander to Lauren. If they can save the others before time runs out, maybe, just maybe, they can explore the fire igniting between them--if the truth about who he really is doesn't pull them apart forever....


* * * * * * * *
After San Diego was hit by an 8.5 earthquake, 9 strangers find themselves trapped when a triple decker freeway collapses around them. Attraction between the two main characters, Lauren (paramedic) and Garrett (ex-Marine), grows while the two of them do their best to protect and care for Penny (a pregnant teenager), Don and his granddaughter Cadence, and an unconscious Sam. The six of them quickly realize that survival doesn't only depend on their ability to ration food, water, and other supplies. Survival also depends on their ability to defeat a gang of three convicts hell bent on freedom.
This was the first book I read that focused on a major earthquake and the devastating situations that follow. The magnitude of an event such as an earthquake is not something that should be taken lightly. So going into "Aftershock," I knew it probably wouldn't be an easy book to read. Honestly, I was amazed at the realistic scenarios that the survivors found themselves in. The hell they went through to survive was remarkably written. It was so clear, that I could easy picture myself in there with them. And I'm thanking my lucky stars that I wasn't.
I absolutely adored the characters and I'm thrilled that many of the main seven will appear in later books. As a paramedic, Lauren was a strong and intelligent woman. Garrett is a good guy with a past he deeply regrets. He doesn't try to run away from what he did, instead he's trying to prove to the world that he is redeeming himself. They fought the attraction as long as they could before succumbing. At the end of the book, I didn't have a problem with their sudden declarations of love. They just went through a horribly stressful and tragic event. Not only were they running out of food and water, but they also had two incredibly dangerous criminals trying to kill them. Lauren and Garrett's emotions are running on high. With that said, I felt that this was one book where the HEA didn't require their "I love you" for each other. I would have been more than happy with how it ended ... as long as we get updates in the following books. *hint* The rest of the main seven characters were strong in their own way. Penny had to give birth with no medical assistance. Don had to be strong for his granddaughter. As a little girl, Cadence held her own amongst the adults. Owen, one of the convicts, is a lot like Garrett. He's not proud of his past and he's willing to do anything to redeem himself. Sam has a long road to recovery in front of him. Together, the seven of them were able to fight the odds stacked against them.
This book is not sunshine and daisies. It is a realistic portrayal of events following a natural disaster. It is dark, gritty, and a little disturbing. Although the attraction between Lauren and Garrett is evident at the beginning of the book, it does take a back seat to the more suspenseful plot. I was in awe of the catastrophic world Jill Sorenson was able to create and I would love to see how the city rebuilds in the next book. Cannot wait to read the rest of the series.
Posted by CrystalBee at 3:00 AM