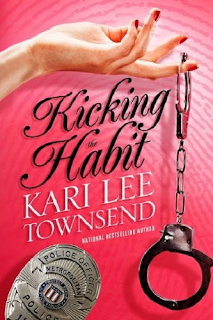 Episode 4 (5/21/2013): Cece has really done it this time. After giving Ace the slip, she takes the T into Boston, but the mess she finds herself caught in this time isn't so easy to dance her way out of, forcing Ace to stick to her like a bad habit.

* * * * * * * *
I'm really trying to like this book. Really, I am. I like the comedy aspect. The relationship between Cece and Ace is starting to grow on me. I love Ace. He's got the patience of a monk. Cece is getting on my last nerve. I just want to shake some sense into her. Or lock her up in the closet. I'm not picky, which ever option is the easiest. Woody's was hysterical. I would have love to hear the crowd's reaction to Cece stripping off her top. That would have been interesting ... to say the least.
Episode 4 picked up the pace a little bit. I liked it better than the first 3 episodes, but I'm still not loving the book. I have a feeling I would enjoy it more had I read it all at once instead of in episodes. Crossing my fingers for episode 5 next week!