Don't Look Away by Leslie A. Smith 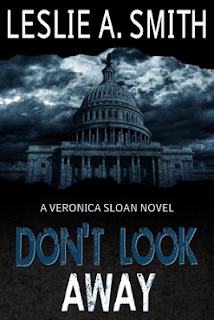 Detective Veronica Sloan isn’t shocked by much. Having lived through the worst terrorist attacks in history—which destroyed much of Washington, D.C.—she’s immune to even the most vicious brutality. But even she is stunned by the discovery of a murder in the basement of the under-reconstruction White House.

Sloan and FBI Agent Jeremy Sykes have been assigned to investigate the homicide because the victim was a participant in a top-secret experiment. Veronica has been training for just this kind of case, waiting to use her special skills, anxious to learn if a recording device implanted in a victim’s head can help solve their murder….before the killer strikes again.

My Thoughts
I've been a fan of Leslie Kelly's romance books for awhile now, but when I requested Don't Look Away on Netgalley, I had no clue that Leslie A. Smith was a new pen name of hers. This one is nothing like her romance books I've read, but I loved it.

Don't Look Away opens on July 4th, 2022. In addition to celebrating the country's independence, the people of Washington D.C. are also celebrating the return to norm as the rebuilding of our nation's capitol continue. The book takes place 5 years after a horrific terrorist attack that not only leveled much of D.C., it also took the life of the President. In the chaos surrounding 10/20 attacks, the government has implimented mandetory micro-chips for every citizen. A new device, called O.E.P. takes the big brother spying vibe a little bit further with optic cameras implanted in volunteer's brains. On this day, an innocent woman is viciously murdered, Veronica Sloan is forced to deal with conflicting emotions and come to grips with the terrorist attacks of 10/20 to find the woman's murderer.

I love books like this - a book with a psychological thriller/suspense storyline with a small hint of romance throughout. This one reminds me a lot of Tess Gerritsen's earlier books. The world that the author created is one I don't think I'd want to live it, but one I want to read more of. The thought of people being micro-chipped like we micro-chip our pets fascinated me. A simple scan and people will know your medical information, your address, etc. It'll alert at your time of death. If that wasn't creepy enough, lets talk about O.E.P. that records pictures of every waking moment of a person's life. No and thank you. It was originally designed to help Alztimers patients to remember memories, but the government took it and ran.

I loved the characters. The chemistry between Veronica and her partner, Mark Daniels, was like brother and sister. Although they shared one intimate moment, they are true partners. There is a scene towards the end of the book that had me say "NO! No...no...no....no!" while I covered my eyes. In the meantime, Veronica is reunited with an old nemisis in Jeremy Sykes. Both have feelings towards each other, but Veronica is deeply afraid of loving again after 10/20. That day scarred her and most of the book is about her coming to terms with what happened. The chemistry between the three main characters was spot-on. It was sizzling between Veronica and Jeremy, but hostile between Mark and Jeremy. Battle of the brawn - yum!

It took me awhile to finish Don't Look Away because there is a lot to digest. It is not an action packed thriller. Instead, it is a slow build to a dramatic ending. I would describe it as a psychological thriller because the images of the three victims being murdered would play with anybody's mind. The visuals the author created stuck with me. I can't wait until July for the 2nd book in the series. Yay!