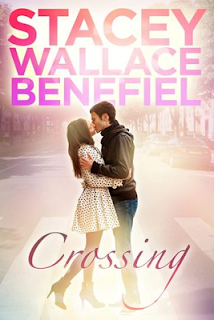 He stole her lipstick…and her heart.

Twenty-year-old Dani Walker can’t believe her luck when she’s paired up with the gorgeous Liam Garrett as her Acting I scene partner – or when he ends up in her bed. Being a Plain Jane with a mouth on her hasn’t exactly served Dani well in the guy department. In fact, she’s had nothing but one night stands. Still, she lets go of her insecurities and falls for Liam, despite feeling like he’s holding something back.

When Dani finally discovers Liam’s secret, she must learn the true meaning of accepting the ones we love for who they are, or risk losing the best thing that’s ever happened to her.


* * * * * * * * * *
Liam may have stolen Dani's lipstick, but both of them stole my heart. It has been a long time since I fell head over heels for characters in a book. Love 'em both! Both Dani and Liam have never really been true to themselves until they met each other. Dani is a little bit overweight and has been teased for most of her childhood. Its gotten so bad that she jokingly tells her friend that if they continue, she'll kill herself. Chase, her best friend growing up, is gay and after being attacked one day, he kills himself. I wanted to hug Dani after reading this passage. As a reader, it was obvious that this event stripped Dani of her last remaining strands of self-confidence. She has convinced herself that she is unloveable. Liam has his own secrets, which I don't give away. He's had to hide his secret for a very long time. After a chance encounter involving a door, both of their worlds are flipped for the better. I'm telling you, Dani and Liam were a gift for each other. They needed each other to become whole and it was beautiful watching them come to each other.
"Crossing" was so beautifully written. There are parts of the book that made me laugh, parts that made me happy, and several parts that broke my heart. The subtle hints to Liam's secret were perfectly placed. Although it is pretty easy to uncover his secret early on in the book, the scene in which Dani finally catches on was remarkably written. Liam's reaction to Dani's actions broke my heart. Afterwards, Dani's reaction to the discovery made me like her even more. I just wanted to hug both of them and tell them everything was going to be okay. "Crossing" was an amazing book and I finished it in a day. It left me hoping for more because I just have to know what happens with these two (...although the author's note gives a little hint).
If you enjoy angsty "new adult" romance with two characters that I think are perfect for each other, then you need to read this one.
* * * * * * * * * *
Links to Buy "Crossing":
Amazon - Barnes & Nobles - Kobo - Smashwords
Posted by CrystalBee at 3:00 AM