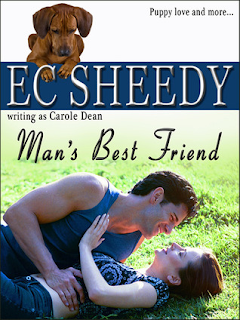 Rand Fielding, moody, dynamic and aloof, preys on billion dollar companies, making himself millions in the process. He buys what he wants, when he wants it, people included. In Rand's world everything has a price and a best-before date, especially women.

Rand's never had a dog and doesn't have time for one. But a surprise gift of what his business partner calls "man's best friend"—a goofy, disruptive, stubborn pup who quickly develops a taste for Rand's Italian shoes—puts him in the market for a professional dog trainer.

Upbeat, open and uncomplicated, Tessa Darwin supports her mom and dotes on her practical younger sister, Annie. Tessa's goal is to become a vet, but until she can pull that off financially, she does what she loves, works for Dawg's Inn Kennels and trains dogs.

Rand hires Tessa and tells her to get his newly acquired, shoe-eating, carpet-destroying fur ball under control, so he can work without distraction.

Tessa's pretty sure bringing Rand Fielding to heel is way beyond her skill set. But no way can you blame a girl for trying...

My Thoughts
Isn't it funny how you pick up a book by an author you think is new to you only to realize that you've read a book by that author before? Yeah, that's happened to me twice in a row . . .

I usually adore books with characters that have to overcome something in their past in order to find love again. In this book, that character is Rand. He's had his heart broken by his ex-wife and dead brother. Protecting himself, he's locked up his heart and resigned himself to a lifestyle of meaningless relationships. That is, until his cousin drags Tessa into his life. Suddenly, Rand is feeling emotions he hasn't felt since his ex-wife and he's not happy about it.

I had mixed thoughts about the book. I loved most of the characters. Adored Rand, Tessa, and Milton. Ned? Not so much. I didn't like how much he toyed with other people's lives in order to (hopefully) win Tessa's affections. He asked Tessa out time and time again and she turns him down. Instead of taking it like a man, he buys Rand a dog and tricks Tessa into training it so she'd finally say yes to Ned. Huh? On the other hand, I was rooting for Rand and Tessa from the beginning because they were good for each other. As for Milt, his one liners and looks towards Rand were fantastic.

The one thing that really bothered me was the ending. Talk about an abrupt end. I wish their was an epilogue or something to give us readers more hints into their future. The way it ended almost has me thinking that they won't last. I don't know about you, but I usually want to picture characters living happily ever after. Don't burst my bubble! :o)

All in all, this was an enjoyable story. I didn't like it as much as the first book I've read of the author's. As a free book, I'm glad I picked it up.

If you'd like me to review the first E.C. Sheedy book - Love Letters, INC - let me know in the comments.