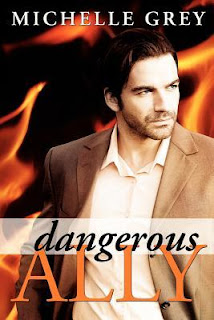 Lacey Jordan is expecting dinner, and hopefully, an engagement announcement. Not her own, of course. After two serious screw-ups, she's all but sworn off relationships. When she arrives at her father's house to celebrate his future happiness though, he's nowhere to be found. As the hours pass, the worst scenarios Lacey's mind can conjure send her rushing into action. However, reality proves even more frightening as she discovers that her father's recent scientific breakthrough is one that people would kill for. To make matters worse, the source of the information is the one person she'd hoped to never see again. Caleb Mansfield, her father's former protege and her former lover, needs Lacey's cooperation, and the very trust he'd stolen years before. But Lacey can't be certain if Caleb's working with her or against her. Running out of time, she has nowhere else to turn. As the trail leading to her father narrows, Lacey becomes a target, risking her life to save him. Too late, she understands that with Caleb back in her life, she's risking her heart as well.


* * * * * * * *
For her debut novel, Michelle Grey blew it out of the park. She created a world I could easily step into and want to stay. Her characters were real with flaws and attributes that made them so alive and loveable. The book had the perfect mixture of romance and suspense. The chemistry between Lacey and Caleb sizzled from their first scene together. You could tell that they had a lot of unfinished story between them and it was fun to watch them fall for each other all over. Both Lacey and Caleb are caring people that'll help anyone out. That just made me love both of them. As far as the suspense goes, I loved every page. It kept me on the edge of my seat the entire book. Just when I thought I had everything figured out, a twist would be thrown in and I'd have to start guessing all over again. Fantastic book all around...
I love reading debut novels. You never know what is in store for you when you read an author's debut novel and I have found many new authors this way. I sincerely hope Michelle Grey writes another book because she's got a new fan in me.
* * * * * * * *
Purchase Links
Amazon - Buy Me!
Barnes & Noble - Buy Me!
* * * * * * * *
Author's Links
Twitter: https://twitter.com/michellegrey13
Website: http://www.threewritersofromance.com/
﻿
Posted by CrystalBee at 3:00 AM