One True Love by Lori Wilde 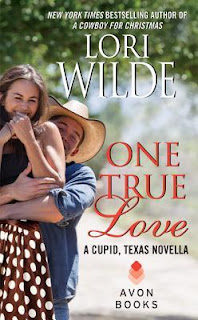 In Cupid, Texas, they say everyone has one true love. And if you write a letter to Cupid, you will get an answer in return . .

Now, from New York Times bestselling author Lori Wilde, read how the legend of Cupid began . . . All it took was one great love story!

Too bad for pretty young housemaid Millie Greenwood that her one true love is John Fant, the handsomest, wealthiest man in town. But in 1924, a maid—no matter how lovely—isn't about to marry into the town's foremost family, and John is on the verge of becoming betrothed to another. Everything seems hopeless until Millie writes a desperate letter to Cupid, and the most romantic legend of all is born . . .


* * * * * * * *
I'm usually not a big fan of prequel novellas. As a stand-alone novella, I love them. As a prequel for a new series, I usually feel like they don't offer enough introduction or back story to be considered a prequel and I wind up wishing it was a full sized book. One True Love was completely different. It made the perfect prequel into Lori Wilde's new series - Cupid, Texas.
In 1924, a tragic event leads toward a serendipitous meeting between Millie and John. Despite their differences in social standing, the two are immediately drawn to each other. Millie knows that they have no chance, but she falls in love anyway. Broken hearted, she pleads with Cupid for help to bring her and John together.
I adored One True Love. Such a sweet story of love conquering all. The secret glances between Millie and John made my heart swoon. Watching Millie's heart break after the dance marathon seriously made me cry at 2am. Speaking of the dance marathon . . . Oh my goodness, that was my favorite scene. If you ever wonder what that scene would look like, go to YouTube and watch Gilmore Girls' dance marathon scenes. I had that episode playing in my mind as I pictured Millie and John collapsing on the floor after the runaround. I could go on forever about this particular scene, but I think I've gushed enough. The novella was perfectly written as an introduction for the new series. It gives the reader the sweetest love story while providing ample background information for the rest of the series. Whether you decide to read it before the series or after finishing it, One True Love is a novella you won't want to miss. It also served as my introduction to Lori Wilde. Of course I'm now hooked and I'll be waiting along with her other fans to read more about the adorable small town that is Cupid, Texas.
﻿
Posted by CrystalBee at 3:00 AM