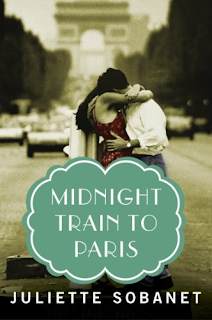 Episode 7 (June 11, 2013): Jillian is plagued with terrifying visions of the future as her connection to Isla intensifies. The search for Rosie and Isla leads Jillian and Samuel to a hidden spot in the Alps where the lines between the past and present culminate to a bone-chilling showdown.


* * * * * * *
I really do not want this book to end. The suspense, the subtle hints of romance, the time travel... They are all magically woven into an entertaining and loveable book. This book has it all. I especially love how the author manages to switch back and forth between 1937 and 2012. She's allowing Jillian and Samuel to solve both crimes and it's not the least bit confusing (to me).
Jillian has finally solved most of the mysterious disappearances of these women. I say most because there is a twist/cliffhanger at the end of this episode that threw me for a second. Could these women be any creepier? There is still a lot left to be revealed in the 8th episode. I haven't decided if I can't wait or if I don't want it to come to an end. Either way, I'm looking forward to finishing the story. Will they save Isla? How will Jillian and Samuel get back to 2012?
A teaser...
"At the sound of footsteps thumping down the hallway behind us, Samuel grabs my hand and breaks into a run. More screams and cries blast through my ears, and as we round another corner, I realize I don't know anymore whether those panicked voices belong to Rosie, Frances, Isla, or even to myself. It's as if I'm straddling a tightrope between the past and the future, and at any given moment, I could plummet to either side." - Chapter 18, episode 7
Posted by CrystalBee at 10:14 AM