He Touches Me by Cynthia Sax 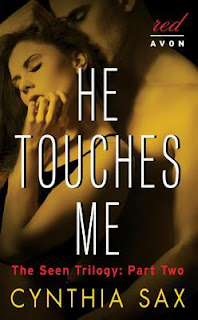 His touch enflames her desires.

Anna Sampson has allowed billionaire businessman Gabriel Blaine to watch her, all of her. And looking is all he's done—until now. After giving him permission to touch her, Anna realizes she won't be satisfied until she has all of this handsome and secretive man.

Soon she tempts him, shreds his control, and pushes him too far. Blaine's reluctance to take her virginity frustrates Anna. He fulfills her fantasy, but what is their reality together?


* * * * * * * *
After finishing the first book in The Seen Trilogy, I originally wanted to wait a little bit before starting the second book. Yeah, that idea lasted all of 10 minutes. I mean, c'mon. Who wouldn't want to know what happens next? Does she give in to temptation? Can he stay true to his vow? Anna is starting to come out of the cocoon she's built around herself. Thanks to Blaine, she's starting to take a bit more care in her appearance and in her actions. She's opening up a little more at work. She's learning to flirt and is even attracting men. While the first book begins with Anna's transformation, He Touches Me starts Blaine's transformation. He's now starting to open himself up to the world. I love how they are feeding off of each other.
And the sex is still sizzling. I'm just saying . . .