He Watches Me by Cynthia Sax 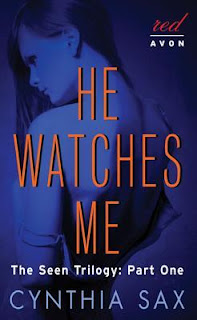 She desires to be seen. He wants to watch.

Anna Sampson has a naughty secret. Every night, she slips into her neighbor's yard and swims naked in his pool. She fantasizes that the dynamic young billionaire watches her nightly nude aquatics, his brilliant green eyes gleaming with lust.

She discovers this isn't pure fantasy. Gabriel Blaine has been watching her via his security cameras, and now that he has returned to L.A., he doesn't plan to stop. That's all he wants—to watch. Anna knows she shouldn't allow him and she certainly shouldn't want more, but she craves Blaine's attention, needing his gaze fixed on her body.


* * * * * * * *
I squealed like a kid in a candy store when Avon emailed The Seen Trilogy to the Avon Addicts. I've seen it being mentioned on the blogs of my fellow Avon lovers, but I was waiting for the final novella to be released. I have a "not so" new love affair with the billionaire recluse that falls for virginal (but not innocent) twenty-something year old beauty. Yes, we have seen many books with this formula, but Cynthia Sax's rendition is beautifully written with characters that'll make you swoon. The first of three novellas follow the beginning of Blaine and Anna's relationship. Blaine, the billionaire recluse, has been watching Anna while she swims naked in his pool. He wants to claim Anna, but doesn't push her too quickly. Anna is simple and quiet. Her main goal right now is to be as invisible as possible. That all changes as Blaine slowly pulls Anna from the shadows and helps guide her as she is becoming more comfortable being herself.
I finished He Watches Me this afternoon and I dived right into He Touches Me. Nearly 30% in and it is already sizzling. Yum!