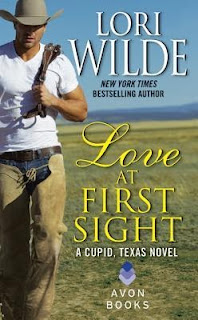 Natalie McCleary couldn't believe her eyes-a lean-muscled, darkly tanned, nearly-naked man stood in her path…and then it hit her: love. Everyone always told her it'd hit like a thunderbolt, and she never believed them. But now she knew: practical, sensible Natalie was head over heels in love-with a stranger. But ex-Navy SEAL Dade Vega wasn't about to be a stranger for long. He'd ridden into Cupid on his motorcycle, vowing to keep a promise he'd made to a military buddy. But a single glimpse at Natalie-soaking wet and unexpectedly tempting-changed his life forever. But how can he offer her is love, when he can't even promise to stay in one place for longer than a week?

Wah! Only two condoms? Would that be enough? He said he was going to make love to her until dawn. Surely they would need more than two condoms.

- Natalie McCleary (Ch.15)
Oh my gosh, this was such a stickin' cute book. I adored every word of it. What I am really enjoying about the Cupid, Texas books is that you get a mixture of a western romance with a hint of historical romance and a pinch of mystery all wrapped up in a pretty small town contemporary romance package. That is no small feat. The western aspect of the book comes from the small town vibe mixed with a lot of Stetsons. The historical vibe not only comes from the history of Cupid, but I also thought Natalie was a bit of a old soul. There were parts of her character that could have come from any heroine in a historical romance. I loved her character. She's very strong, both mentally and physically. She could be pegged as a weak person at first glance, but the woman can kick some serious tail when need be. Dade is the opposite of Natalie. He's the contemporary aspect of this fabulous romance. He's strong with a bad boy background. Yeah, baby! The romance between Natalie and Dade was a mixture of sweet and sizzling spice. The kiss they share at the bar? Wow! They fight the attraction between them for a good portion of the book, but they weren't kidding around once they gave into temptation. Who knew banana pudding could be such a turn on? :o)
There was just the tiniest pinch of mystery surrounding the disappearance of Red. There are a couple hints throughout the book that were so subtle. There was even a little bit of action towards the end of the book.
Love at First Sight was the perfect story for the first full novel of this series. It introduces two of the women for the next books. The book made me love all of the characters, not only Natalie and Dade, but also the secondary characters that'll be present in all of the books. I love the setting. I love the writing. It is a fabulously quick book for a summer day. ﻿
Posted by CrystalBee at 3:00 AM